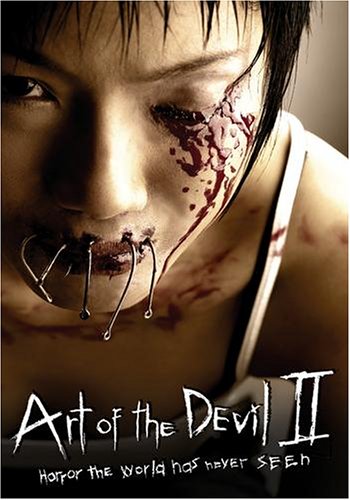 Well if this did not interest me greatly; the 2005’s Art of the Devil 2 being directed by seven different people would. I will list them accordingly as members of the self-entitled “Ronin Team”: Pasith Buranajan, Kongkiat Khomsiri, Isara Nadee, Seree Phongnithi, Yosapong Polsap, Putipong Saisikaew, Art Thamthrakul, and then look deep to find another film that credited seven directors, not including anthologies. No, I cannot think of anything fitting that bill. To sum it up, Kongkiat Khomsiri has his own film Chaiya (with the English title Muay Thai Chaiya) released over here in the U.S., but from there many of these directors listed above have only ever worked on Art of the Devil 2 itself and its spiritual sequel Art of the Devil 3.

Along one of Thailand’s various high rivers, a man fishes and catches birds in a small boat. He effectively snatches both a catfish and a duck in an interesting technique, where the line and hook are attached to the swimming duck. While struggling to remove the hook by force, the man accidently pulls the hook out of the catfish and into his thumb. We then cut to him being brought to an elder woman who says that he is afflicted with, not tetanus, but a Cambodian curse. As she attempts to clean up various bruises and gashes on the man, going as far as to dig into them, pulling out fish hooks. The man’s pain gets worse and he starts to hallucinate seeing images of a mystic man sticking fish hooks into a similar catfish. The curse climaxes when the hooks swim up his veins until they sprout out of his eyes.

Kim is a Pre-Med student, who after hooking up with her old high school friend Por decides to vacation with the rest of her friends. The plan is for Kim to join the nerdy Por, the boyish Tair, the flighty Noot, and the perverted Ko to stay at their old friend Ta’s house on the river. Another reason for this visit outside of basic fun, centers on Ta’s father’s recent funeral. Bound together, the five university students and Ta visit with Ta’s mother and the friend’s past teacher Panor; yet when weird noises and “I thought I saw a body underneath the water” start to break the cheery mood, actions and events that tie all of these students (outside of Kim) back to the ruining of their old teacher’s carrier and life start to bubble up. They might have been able to repress and forget those senior year incidents, but that does not mean Panor feels the same way. 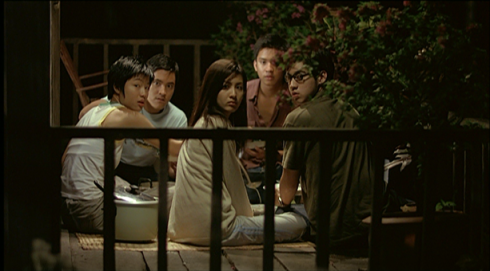 At its core, Art of the Devil 2 is a “teenagers or University students travel to a semi-remote place where they find themselves at the mercy of some human or inhuman force” type of slasher film. To be honest, lately I have been divorcing slasher film from general Horror. Now, considering that a discussion on how modern Horror fans seem to be antiquated with  slasher or mainstream torture porn fare like Saw, which would take too long. How about an opinion on what Art of the Devil 2 tries differently as a slasher film? The one big groan about characters in these types of films stems from how they are usually deplorable or boring human beings;  leaving you rooting for the film’s menace to kill them instead of cheering for them to survive. For torture porn this is its meat and potatoes, and the various slasher booms did not help when their overall lackluster efforts where carpeted underneath lists of goofy kills cleaning up terrible people. Outside of Ta, Art of the Devil 2 might not have the most engaging lead cast, but at least you feel that the directors did not go out of their way to paint them as repulsive as possible.

Certain scenes in Art of the Devil 2, with the sepia toned high school flash backs in particular, really drove home that a different director was taking over each new shot. It got to the point where there would be tonal shifts so rabid that I joked with myself about how these seven must have been constantly proclaiming “Hey, let me shoot this one!” At times it feels like a general slasher film with exaggerated mono-logs about bringing people to heaven by burning them alive, to shots of Ta and his dad communicating a bond like a drama, to shots of Kim and company riding the train to visit Ta where she gives an inner monolog like a made for T.V. romantic comedy. This swapping between directors left some rather nice scenes, but just as many muddled ones.

Pros: Tries, and at points succeeds, to tell a multi-layered story dispersed with what one would expect from what is basically a voodoo centric slasher film. This film succeeds in having a rather decent lead in the form of Ta, thus breaking the trend of a deplorable main character that is only there for gore fodder. Some rather well thought out gore shots like the earlier mentioned fish hook scene as well as an accidental cannibalism sequence where specific body features like blue eyes and a tongue rod piercing are nicely foreshadowed.

Cons: The DVD print looks dirty, and for a film less than a decade old, this is inexcusable. It has some of the worst generic music queues so distractingly lazy that silence would have fit better. The aforementioned happy flashbacks will off set the tone for some viewers.

Yes, once again I have to present to you yet another film under Media Blasters Tokyo Shock label, and yes I, like you, am confused about how they can just consider anything they release from East Asia under a label synonymous with Japan. While it might have some inconsistencies, I do feel that shoehorning all slasher films into their own little ghetto as film would do this film a disservice. Horror in all of its tangentially related forms has seen relatively low-budget executions leaving a bad taste in the film fan’s mouth. Art of The Devil 2 at least tries to do more than the norm, so it disserves your attention both for that fact and because it attempts to share Thai mysticism. And to me, demonstrating a cultures spiritual color will always be followed by kudos.

This is Part 3 of Tour of East Asian Horror.

Like Loading...
‹ Wormwood Gentleman Corpse Review: Bloody Hilarious!
City Hunter The Motion Picture Review: So You Say This Is Not The City Hunter Film ? ›