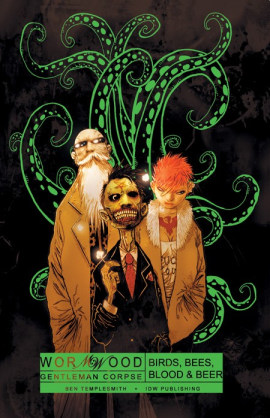 Black comedy is something of a fragile glass tool for humorists and writers alike. Pour too little, and it becomes forced and unnecessary, use too much and the work becomes uncomfortable and difficult to laugh at. As the years have passed, more and more works are trying to implement some form of black comedy, to varying degrees of success. Wormwood: Gentleman Corpse is one of these works, promising zany comedy and investigations into the supernatural. Without further ado, here’s a look into Birds, Bees, Blood, & Beer.

Ben Templesmith, artist and writer of Wormwood, got his start in the American comics industry working on Hellspawn. However, Templesmith’s breakthrough work was IDW’s Thirty Days of Night mini-comic series, in collaboration with writer Steve Niles.  Templesmith’s other work includes IDW’s Singularity 7 and Welcome to Oxford, as well as Image Comic’s Fell. Wormwood was originally published as short, episodic comics in LO-FI magazine, which were then collected in full issues by IDW Publishing.

In a hellhole of an unnamed city, where the strip clubs are actually covers for an interdimensional portal to God-knows where, and strangers in the dark try to sell monster-impregnating sexual performance pills, series of abnormal crimes are the norm. Wormwood, a worm with telepathic powers who uses a well-dressed corpse as his main body, investigates these happenings with the help of his sidekick, the specially-created bearded robot Pendulum. Other members of Wormwood‘s colorful cast include Medusa, ex-girlfriend of Wormwood and head of a popular sub-human strip joint, Phoebe, Wormwood’s gun-wielding bodyguard and Trotsky, a ghost trying to pay off his karmic debts to move on to the afterlife.

Birds, Bees, Blood & Beer is split into two distinct parts. The first is an introductory short story in which Wormwood investigates an outbreak of Dweevil Plants killing clients at Medusa’s strip club. The second, much longer story follows the case of strange Alien-like creatures bursting out of the abdomens of innocent women and men alike. As Wormwood and company look further into the series of deaths, the chest-bursting “babies” are revealed to only be smaller parts in a much larger plan of someone hiding in the shadows.

Templesmith manages to blend elements of supernatural horror, gritty crime drama, and dark comedy in such a surprisingly well-done manner to create a hilariously twisted adventure. The story’s humor, in particular, is incredibly well-written without feeling overly tacked-on or forced, and ranges from Wormwood’s snarky quips about the oddities surrounding him to minor sight gags, such as a package of cigarettes labeled with the words “cancer sticks”. The characters in Wormwood are definitely nothing to be glossed over either, with everyone having their own distinct quirks and appearances. Whether they be the titular character’s British-inflected comments about the underworld’s strippers, Mr. Pendulum’s bickering with a vomiting pedigree Leprechaun or Medusa’s oddly casual conversation with a companion over opening the gates of Hell, the eccentric cast builds up the comic’s setting even more. Even the minor characters are interesting, such as Nysrogh, the multi-armed butcher who offers monster genitals as delicacies.

The art in Wormwood builds up the demented setting like condiments on a gourmet sandwich. The varied cast is only complimented further by Templesmith’s character designs, which vary from the more humanoid characters like Phoebe, to more monstrous ones, like the great demon Maloch. However, there are times when the characters look hastily scribbled out in certain panels, making them look rather sloppy instead of just stylized. Templesmith chooses to color the panels in varying tones of sepia, green and blue, and notably, he almost completely colors panels (and occasionally, entire pages) one single color. This gives a unique look and feel to the comic’s aesthetic, especially since it helps to emphasize specific settings, but it has the effect of washing out details in the artwork itself.

Pros: Story is engaging and straightforward, making it easy to read. Humor aspect is strong and solid all around. Characters are quirky and amusing, and their designs are distinctive. The guest art and gallery at the end of the volume is a nice bonus.

Cons: Characters’ personalities could be a little more distinctive. Artwork can be off-model at times, and the coloring style washes out details.

New Wormwood stories have been collected in full volumes by IDW publishing, and Birds, Bees, Blood & Beer is one of the three currently ongoing collected editions of the comics. If you’re ever in the mood for a dark and funny romp into the supernatural, definitely check out Wormwood and enjoy every alcohol-stained, cigarette-scented, body-bursting moment, and be sure to savor it all slowly.