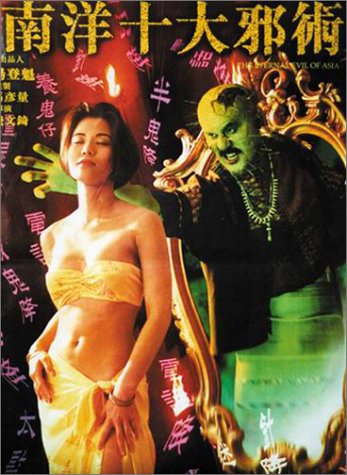 1995’s Eternal Evil of Asia is directed by Man Kei Chin. Considering practically everything he has directed that has never been released over here (Eternal Evil’s practically unknown presence only helps this notion), I can say with conviction that my IMBD skills dug up a ton of stuff with fully Mandarin titles (for instance, Shou xing xin ren lie) that unfortunately means referential dead ends. He does have two titles called The 33D Invader and The Haunted School to spring board reference points; now that I think about it, this is my first non-martial arts and non-John Woo Chinese film considering that I misplaced my copy of The Super Inframan before I could watch it. It is always good to traverse into new terrain.

After getting back from attending his parents funeral, Nam (no one is ever given a last name) restlessly argues with his son in the living room about how all the ten year old does is eat instant ramen and watch T.V. After his wife goes off to shower, his frustration rises to a point where he commanders his son to make him something to eat. Nam’s son in kind offers his father some of the instant ramen that lines a living room cabinet; this causes Nam to freak out at his kid, sending his son running to the downstairs kitchen. Alone, Nam receives a phone call from a couple that claims to be his parents, a fact that Nam takes as a prank.  He hangs up the phone and he hears them knocking at his front door. Nam continues to run throughout the house being tormented by these spirits of his parents until he ends up hatching his family to death and throws himself off their apartment roof to land and be impaled by florescent vendor lights down below. As this is going on, a man with a voodoo doll is interestingly implementing its use to cause Nam body specific pain like you would expect from a voodoo doll, but instead of causing physical pain, it is instead warping his mind.

Nam’s friends, Kong, Bon, and Kent find out about his death, and soon Bon is haunted by Nam’s ghost. After contending with his deceased friend’s, Bon is pushed by his girlfriend, Kong’s sister May, and Kong himself to reveal what might be the cause of this otherworldly punishment. See, about a month prior, the four men went on a trip to Thailand where after escaping from a strip club/cat house staff brandishing swords, finds themselves stuck in the middle of a witch and wizard fight between the wizard Laimi and a married couple. The four help Laimi win and Laimi considers them his friends until an altercation with his sister causes Laimi to curse their very existence. With the aid of May’s revealed to be witch friend Mei (a woman who grew up in Thailand but resides in China), Bon, Kong, and May have to find a way to stop Laimi before he finishes his revenge. I know it sounds rough, but it all makes sense if you watch it. 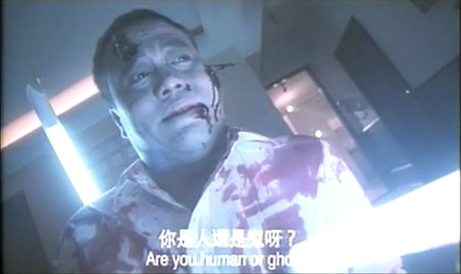 Eternal Evil skirts the line between sex comedy and horror in a way that I think makes it stand out. Most of the Thai voodoo that Laimi uses, called enchantments by Mei who states that they are tied to enforcing their dolls or tools with an object of the person like hair, ranges from making Nam hallucinate his wife as his dead mother to stopping Bon from getting an erection all the way up to separating the spirit from the body. This is a film where a cliqued sensual saxophone will play during a shower scene, but then things like placenta trap magic will show up. There is an underlying feeling of comedy to it all, but also an added mix of spiritualism based horror and sexual undertones.

I should stop tiptoeing around this, but since the Netflix stream is the only way to watch Eternal Evil, I have only seen their awful looking print. At first, the darkness and aged look of it reminded me of my copy of a Sonny Chiba film named Doberman Cop, so this made this 1995 film look as old as Doberman Cop from 1977 (that is my excuse for all of my screen caps looks as bad as they are).Take even the subtitle track, where it is this tone of white that is hard if not impossible to read if it is over say a white blouse or light, not to mention that the Mandarin characters show up above every single line.

Pros: Keeps to its sex comedy with horror story with great visual application of the voodoo based surrealism it bases itself on; for instance, Nam’s ghost still has the fluorescent lights piercing through his ghost form, but what makes it great is that they are set to flicker constantly while attached, making for a great visual touch. The sex comedy is stuff you would expect, but somehow is played better and more genuine then other films. It is fine to demonstrate perversion, but there is a way to do it right and there is the way to do like you have the mind of a twelve year old.

Cons: Certain big concept/no real feasible implantation action shots tend to distractingly slow the frame rate; but that is the price to pay when you want to show something distinct and have a finite about of time to try. Terrible film print and subtitles, I know this film deserves better.

As you might have guessed, I have not found a physical copy of this anywhere, so for now it is fair game for those of you with Netflix out there. I wish that was not the case because I bet that someone like Discotek, and while Eternal Evil is not Chinese sexploitation, would fit that operations bill with their release of A Chinese Torture Chamber Story (the joke is that I am giving an example of a fraction of all the stuff Discotek puts out). Sometimes I look deep down into my very being and ask myself, “Have you become so conditioned to bizarre films that in a way you expect everything to be like this? Does that not cloud your judgment compared to other people who are not as conditioned?” To which I always answer back “While it might be conditioned, it is far from an obstacle to avoid”. Eternal Evil of Asia succeeds at everything it sets itself out to be, and that deserves my respect and praise.

This is Part 2 of Tour of East Asian Horror.