Home › Film › All Quiet On The Western Front Special: Yes, Another Class Asked For One

All Quiet On The Western Front Special: Yes, Another Class Asked For One 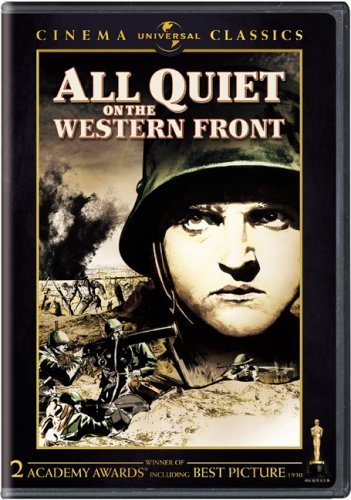 The 1930’s film All Quite on the Western Front is directed by Lewis Millstone (known for both the Of Mice and Men film adaption from 1940 and the original Ocean’s 11 from 1960) from an adaptation of German writer Erich Maria Remarque’s original novel of the same name. The story centers on a group of high school age German boys, specifically one named Paul Bäumer set during the start of World War I. As a parade of troops traverse through a small German town, these boys are captivated by their instructors’ lecture about what great importance their lives will be if they serve their fatherland Germany in the war. And while at first the boys see this as an opportunity to enlist instead of attend school, they slowly cherry-pick what positions they think they will receive as enlisted men. But once the truth about joining the army be it the rigorous training drills or lasting days in shell-shocked trenches, starts to disfranchise their romanticism, their whole world changes. Paul, after a stretch of time is revealed to be the main character who is supposed to represent the way war takes its toll on those involved, slowly finding that once you enter the world of war, your regular life seems almost alien.

While implied to be at a point during WWI where Germany is still feeling empowered spiritually, the only date mentioned is during Paul’s return home when he mentions it being 1917. Historically, Germany is currently fighting France (the “Western” part of the title is in reference to the two sides of Germany’s territory that it had to defend, East for Russia and West for France) in trench warfare, with bomber planes and machine guns readily available. None of the fights are specifically named and since I am basing the characters from only the information given in the film and not the original novel, I cannot tie anyone involved to real life historical figures. Considering that most of what we had covered in class regarding WWI tended to center on the American point of view (only Germany’s militarism and reason for involvement were discussed). All Quiet on the Western Front was interestingly told from the German point of view, I was lucky to have a viewing partner in my friend’s roommate Kyle Sawyer who mentioned the level of proficiency that the countries’ army had at this point. Kyle mentioned, to paraphrase “Germany and Russia were 19th century armies working to keep up with France and Britain’s 20th century armies”, explaining the rather similar to American Civil War uniforms that the Germans’ where wearing. As I will explain later, WWI acts more as a setting and an experience instead of a down-to-the-detail representation of what happened at one fight or another. 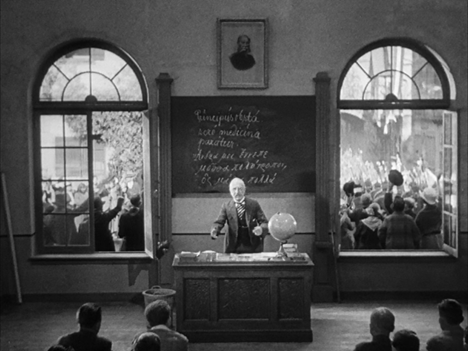 Historically minded, the fine details are not really an issue in All Quiet on the Western Front. The teacher’s speak at the beginning does address Germany as the Fatherland denoting the time period, but speaking of fighting for one’s country not as a reflection of the Franz Ferdinand’s domino-effect on Europe, but the general pride of nationalism at serving one’s country. They go to fight the French, but interestingly do not regard them as complete monsters, commonly known as dehumanization of the time, but that they just happened to be the lighter dressed soldiers on the other side of the war zone  Still viewing and analyzing All Quiet on the Western Front with Kyle, we came across two specific scenes which we classified as either historically or un-historically accurate. Under historically accurate, there was a sequence when Paul and the boys swim across an occupied town’s river to meet with some French woman for romance, promising food for attention. During a part where Paul is losing himself in the appearance of one of the girls, she pays attention to him for a moment, but then starts to scarf down the food they brought. Kyle mentioned how French boys and girls (think late teens or early twenties) would entertain or encourage German soldier to feed them, and later taking the food back to their starving families. On the un-historical, there is a French soldier extra that, as someone who served in the Air Force, Kyle noticed was using his bayonet incorrectly. He had it flipped around, barrel to his chest and clubbing a German soldier with it like a bat. Kyle mentioned that this was not sticking to training. Like mentioned earlier, All Quiet on the Western Front seems to serve more as a setting then a piece open to accuracy nit-picking. 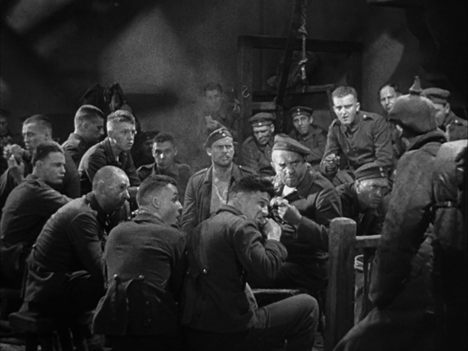 At its heart, 1930’s All Quiet on the Western Front is an allegory about the romantic swan-song that young men find themselves enamored with war and how the harsh realities are far from what they were sold. The opening message that starts the film mentions that they are not saying anything for or against WWI itself, but that the focus is on the individuals who fought and died for their country. And that is where All Quiet on the Western Front shines in just how romantic it becomes. Thinking back to my sophomore year in high school, Film teacher Ms. Sawyer mentioned how this being an early set of the “talkie” form of film, most of the actors would be speaking (basically proclaiming) with radio voices. Mix that rousing clear dialog with over the top tonal shifts ranging from comedic to serious and you have a film that succeeds at depicting not an anti-war message, but a human element message that does not allow itself to dredge through “War is Hell and we will demonstrate that with perpetual stern faces” feelings that make it more enjoyable and engaging to witness. It might seem to sugar-coat a serious subject with its comedy, but it knows to treat the subject matter with respect to get their point across. If I had a larger active knowledge on War film, I could consider All Quiet on the Western Front a distinct outlier for the genre. But since that is not the case, to me it is just simply a wonderingly crafted film.

Like Loading...
‹ Attack the Gas Station: Because Why the Hell Not
The Black Order Brigade Review: WE ARE STILL FIT TO FIGHT…Well, Most of Us Anyway ›