Many of you have been reading manga long enough to know that most manga were originally released in anthologies. Magazines like Shonen Sunday, Cookie, and Weekly Young Jump (the last one I might add contained Tetsuya Saruwatari’s Tough and Kazuo Koike’s Mad Bull 34) are just some examples of such anthologies. One such magazine, Manga Erotics F, with its pages filled with the works of Natsume Ono, Hiroaki Samura, and Usamaru Furuya, purports itself to be an anthology housing creators with very distinctive art styles. One such individual is Jiro Matsumoto; the mind behind the 2007 dystopian manga  Velveteen & Mandala his American debut (got you thinking that I am going to cover Furuya’s Lychee Light Club; but that manga is for another day).

Velveteen & Mandala entails the daily life of Velveteen, a blonde high school runaway who takes up residence in a hollowed out tank by the riverside. Her days are spent conversing with Mandala, a raven haired girl with an apparent psychiatric problem who sports a more upper-class high school uniform. The two roam the riverside inhabitance for food and supplies; this is where uncertainty sets in. The area around the riverside seems to be completely abandoned; almost as if the two girls are the only ones left alive after some attack. But they are not alone. Remember how I said that there was nothing “alive” in the area with the girls? I did not talk about what was dead. Every few days planes will fly overhead and drop piles of bodies into the outstretch plains near the riverside. These bodies are infected to the point that they have become what are called a deadizen. You know how some zombie stories focus on how the zombies still show attachment to their past lives by putting on the clothes that they once wore? Well, these deadizen are that but taken to an extreme. The deadizen might as well still be alive, for they seem to continue living their lives; playing cards, conversing, and upholding job requirements. The thing is that this is all done while they continue to decompose. 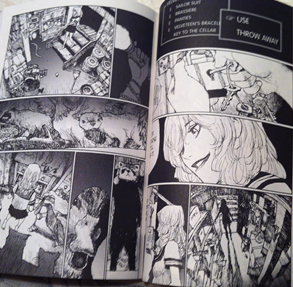 Stepping back from this is one other entity that I would be remiss in not mentioning. There is one person who also lives by the riverside. Called by the girls as “The Super” (short for Superintendent?), this Suginami Ward hired worker spends his days both hunting the roaming deadizen, as well as collecting data samples from the region. You find out that the reason the two girls are still allowed to inhabit the area is that The Super discovered that they were immune to the air born disease that causes the deadizen. Only thing from this point is to watch as Velveteen & Mandala break down due to a mix of steer crazy and malnutrition.

Jiro Matsumoto’s art relies heavily on quick pen strokes. Take for instance the way that he drew the plains covered environment, where it looks like a collection of single pen motion. All of his artwork appears to be a collection of quick moving sketches pieced together. Everyone is made of these thin lines and all harbor razor sharp chins. It is crosshatching taken to the extreme. Up until Velveteen & Mandala, I thought that he just had a thing for drawing pizza slice looking noses, but his character designs have taken an upswing. Case in point, Velveteen herself, who I will admit personally, has enough distinctive facial features and time dedication to merit being an attractive character in an otherwise ugly-at-times world. Jiro Matsumoto will also draw the most detailed collection of random things this side of Genshiken’s Shimoku Kio. 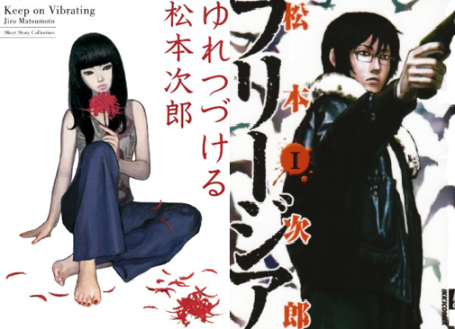 Velveteen & Mandala is nothing without its elements. Things just feel dirty in this environment, from the trash that fills the tank Velveteen sleeps in, to the usual of visual scatological material, all the way up to the grimy film that covers this dystopian setting. Horse headed men and gas masks fill Matsumoto’s work; as well as a tendency for nudity, similar to Tibor Takács’ Redline only adds in distinguishing his work.  There is some dark humor to be had in this manga, usually in the form of breaking the fourth wall. Studio Gibli references are played out in the dialog like it is nothing, Mandala is constantly bringing up Gundam, and Jiro Matsumoto will name drop himself in an attempt to poke fun in a similar vein at Osamu Tezuka. There is even a chapter where Velveteen’s actions are facilitated by an RPG style layout, with “due you wish to save?” text included. This humor lulls you into an upbeat mood that I promise is meant to make the human atrocity on the next page seem all the more unexpected.

Pros: Atmospherically, this comic looks and feels perfect. The sun heating the overgrown grass, Velveteen’s tank lying among piles of trash, and the cloudy sky fit for excellent scenery. Tries for the best kind of humor; the dark and messed-up variety that I do ever so love.  Velveteen is an actually interesting character. I am so engrained with this loathing for blonde characters in fiction that what I was really missing was someone like Velveteen. She is by no means perfect, but she is written with a level of acceptability that far surpasses almost any other blonde female characters that I have ever witnessed.

Cons: Suffers drastically from its own level of absurdity. Characters like Mandala and The Super are there more to agitate Velveteen, then to do anything else. They are not flushed out enough and it really is a detriment because of what I did see of Mandala’s past was interesting. When the story hits its climax, it is underwhelming compared to what it could have been if the series was longer. As it says on the back of the book, this manga has a level of scatology to push enough readers away.

Velveteen & Mandala is a great example of a mixed bag. It is fantastic and surreal at times, but follows with a plot that does not know what it wants. Weird enough to keep me interested and engaged, but suffering from a lack of a final grandstand. Vertical Inc. put all of this manga out in one set, with one of the coolest flipped covers that I have ever seen. Readers who like their humor darker than the center of a black hole and the weirdness scale turned to MAX should at the very least look into reading Velveteen & Mandala.

Like Loading...
‹ The Sixth Gun Review: Villains, Tonight We Ride
Shinesman Review: The Goal Is To Get Overtime Pay! ›