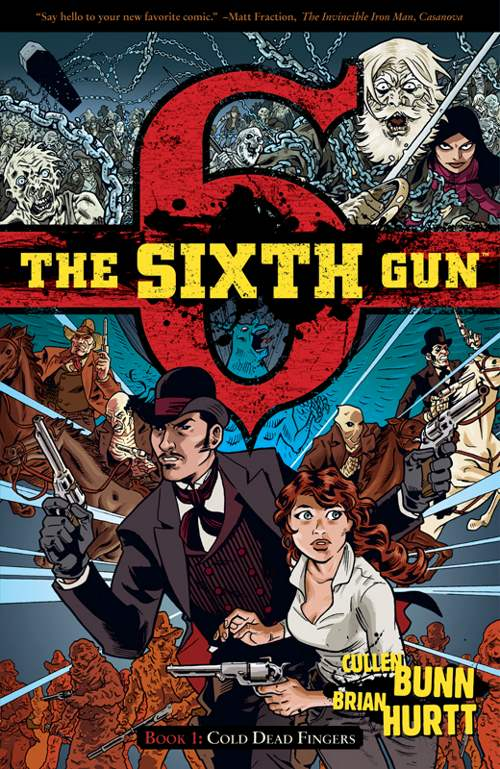 Comics have had a long history with the Weird Western genre. Jonah Hex aside, titles like Garth Ennis’ Preacher, Hyung Min-woo’s Priest, and Todd Livingston’s and Robert Tinnell’s The Wicked West, encapsulate the blending of  Western with other fictional realms like Horror and Science Fiction. Westerns have long been considered a driving force in literature due to its importance in American history. Tonight’s review is what I consider the newest chapter in the Weird Western genre, volume one of 2011’s humbly named, The Sixth Gun.

The Sixth Gun was written by Cullen Bunn, writer of The Tooth and many short fiction proses. The artist, Brian Hurtt, worked on Three Strikes and Queen& Country. Both men worked together in their first collaboration, The Damned. Bill Crabtree seems to have been added to the title as a colorist after the few issues.

Our story starts by telling the tale of the sixth gun. A vile gun of six whose evil was once wielded by Oliander Bedford Hume, a Confederate General who at one time struck fear into the hearts of many a man. His death, at the Razing of Devil’s Forks, by the hands of a preacher for a time stopped Hume’s madness, but as they say about Hume, “A man with that much anger and bloodlust…with all that dark knowledge…can’t ever really die.” These words are spoken many years later by our lead, the darkly clothed Drake Sinclair. Sinclair seems to reflect all-sorts of self-gratification, as he searches for the Montcrief family, the current holders of Hume’s gun. We first see him talking to the Gallows Tree, a monstrous leafless tree filled with the bodies of hanged men, about the location of the hidden Monticrief family. The spirits that inhabit the bodies tell Sinclair to travel to Crescent Junction, a long trip for the horse traveler.

During the time it takes for Sinclair to reach the Montcrief farm, the shadowy hand of General Hume’s wife Missy’s hired help, the Pinkerton National Detective Agency (think the Men In Black but working in the wild west), have already beaten Sinclair. After a shoot-out, the Pinkertons succeed in killing the bed-ridden priest. But plans break down after priest Montcrief’s daughter Becky gets ahold of the Hume’s gun. This is where things get interesting; see the only person that can use the gun without it burning them would be the last person who held it, ending only after the person has died. Since Becky now has the gun, the Pinkerton’s are forced to bring her back to Ms. Hume.

Meanwhile, an even more climactic battle is unfolding. Four imposing villains are spotted near a southern open roof church. Knowing of their arrival, the monks huddle around the wooden entrance, guns at the ready. The four men blast through the entrance, sending men and door flying. The men are revealed to be General Hume’s old lieutenants, each carrying their own unique power granting gun of the six. The reason t they are there is for their buried leader, who was placed deep down in this holy places’ well. They drag his watery grave out, and let loose the chain bound menace. Now all is set for Sinclair’s and Becky’s journey for survival, with only Sinclair’s bounty hunter friend Billjohn O’Henry there to stave off the General’s army.

I have got to say, Cullen Bunn can really pace a comic. This first volume without revealing anything too major, reminds me of an on-going T.V. show that starts with a big movie. Bunn keeps everything going a mile a minute without letting things drop off needlessly. He builds up the story hits an all-encompassing climax, waits for the dust to settle, then leaves room for more story, just like the ending shots from the Conan films. He starts big with the General and his men, but allows for the reader to get situated with the surroundings.  He plays things off with an occult tinge that shows in the narrative and the atmosphere.

Brian Hurtt’s art style pleases greatly, but is not without its hindrances. To start, he has fantastic color. His use of brown, orange, and red give that rustic texture to The Sixth Gun’s world. The fire looks hot, the desert nights look cold, and the spirits look almost tangible. Hurtt’s characters look the part, especially Hume’s men. They appear haggard and wasted, many even taking up sickly exteriors to cover their filthy interiors. Hurtt even shows artificial and natural shadow effectively. The only problem is that he will leave certain panel backgrounds empty, containing only one shade, thus leading to a break in focus. I will admit that this is an unfortunate problem with the way Hurtt places the panel focus on the character. He gives a great 360 look of profile, but will leave his character with distracting dot eyes and light mouths, taking the reader out of the moment.

Pros: As mentioned earlier, The Sixth Gun is a quick moving adventure comic that builds up tense and intrigue without breaking down. Brian Hurtt’s use of color breathes definition to The Sixth Gun, making it stand out from its other shelf cohabitants. General Hume and his men are effective menacing threats, especially with their literally “hatred” filled guns.

Cons: You know how I said that this comic goes at a nice pace? Well, this causes detriment with characterization. Sinclair and Becky are cool, but since they are running around so much, there really is not enough time to delve into their character. This can also be said about Hume’s lieutenants, who are cast off way to quickly to be flushed out. In addition, Hurtt’s artwork is not as consistent as I would like it to be.

I bought The Six Gun because the cover looked awesome and I liked the idea of reviewing a Western comic.  I sure made the right decision. Volume one was put out by Oni Press, and from what I have seen of volume two, the story continues its Weird Western adventures just like an episode of The Adventures of Brisco County Jr. A few of you might have been hearing the hype about this comic, and if I have anything to say about it, I suggest following those hints. Because The Sixth Gun is just what the sawbones ordered (ending on a western pun, someone must think they are sharp).