Octopus Girl Review: The “Modern Girl” Is A Crazy Killer 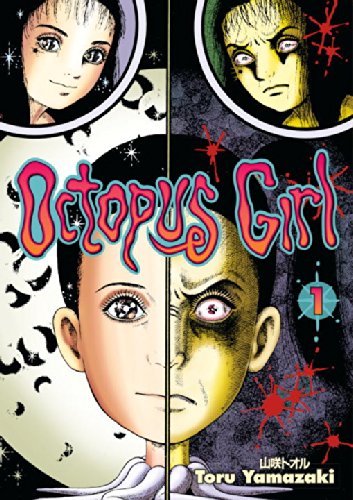 Back in the far flung past of 2011; I was binge reading a ton of manga by famed horror mangaka, faux-snuff film writer, and modern samurai Hideshi Hino. My university library, a place normally used by me to bum time before my next class, provided my binge as it had an almost complete set of DH Publishing’s Hino Horror series (an even odder duck from a publisher who I often associated with awful looking unofficial guide books for popular Shonen manga). What made the Hino Horror collection so interesting from a manga horror fan perspective was seeing Hideshi Hino’s art jump between decades and the realization that Hino often reused the same premise or story structure. This became super apparent when I reviewed a more recent work of his called Lullabies from Hell, a modern anthology collection that revisited the round-eyed auto-biographical character Hino used back in his 90’s The Collection stories. So why am I digging up old horror manga memories; a realm filled with gauged eyes, furrowed brows, and uneven remembrance of one’s Yakuza father? Because I just read Toru Yamazaki’s 90’s shojo satire love letter to Hideshi Hino called Octopus Girl, and I felt like sharing.

I would feel worse about describing mangaka Toru Yamazaki first and foremost by his open homosexuality, but in a world where it’s rare to even find pictures of mangaka, let alone find interest, I think I will live. No joke though, outside of some sources saying that he’s also a T.V. personality and recording artist, it’s not easy to paint Toru Yamazaki a mangaka as widely prolific as the two men (horror manga icons Hideshi Hino and always cheery Kazue Umezu) he homages in Octopus Girl.

Octopus Girl is the end result of fusing decades’ worth of Hideshi Hino and Kazue Umezu horror manga tropes into the “modern girl” body of high schooler Takako Unabara. Bullied and labeled Tako (octopus) by her classmates for being a “super-cute goody two-shoes”, Octopus Girl wastes no time in turning Takako into a vehicle of gross atrocity. Takako’s origin story into the titular Octopus Girl is initially a relatable one of simply believing that your bully’s just secretly want to be friends. Ever happy-go-lucky, Takako’s delusions are quickly shattered when her bullies go too far and almost suffocate her by shoving a live octopus into her mouth. Takako’s allergy to octopus doesn’t stop at simple vomiting and nightmares, but in fact turning her into an octopus girl. The head of a fifteen year old girl attached to eight tentacle limbs. Her youthful body now a hideous monstrosity of purple, Takako quickly murders her bullies in revenge for taking away her ability to ever become a famous pop idol and quickly escapes to the sea.

Takako does find one companion during her escape from murdering everyone who slights her, in Sakae Utsubo. Once a practicing nurse, Sakae‘s crush on an aspiring doctor ended in tragedy when he replaced her entire body with that of an eel.  Around the middle of the first volume, a formula starts where Takako and Sakae (given magic human bodies with the help of a sea witch so nightmare-fueled that she makes Disney’s Ursula appear gorgeous by comparison) try to leave their deep sea safety to find part times jobs or, in Takako’s case, re-enroll in school.

From the gross-out origin story to partnering up with Sakae, Octopus Girl’s story of Takako and Sakae trying to fit  back into society often gets derailed by Toru Yamazaki simply wanting an episodic gag manga filled with gore, shit, and piss. Yamazaki’s love of Hideshi Hino’s eye stopping depictions of violence mixed with character designs liberally lifted from Kazuo Umezu’s own mannequin people are there aplenty, but Yamazaki adds satire and slapstick. Quips about how Sakae won’t pluck the hair from her facial mole (traditionally considered bad luck) appear just as rabidly as graphic panels of human mutilation, like when Takako discovers the neglected kid she was babysitting in the middle of nailing the kid’s parents’ intestines to the walls. Octopus Girl has this goofy feel where an entire chapter can be about how Takako’s eye infection caused her to see everyone around her as realistically drawn 90’s Japanese celebrities, but ends with her getting mad and killing some pharmacist with an ax.

The manga does have its poignant moments though; one that comes to mind is a story of Takako’s short time as an elevator attendant where there was an accident when the pulley snapped. Takako was with an old couple and their young child, and the story ends with Takako witnessing the man protect his family. His wife and kid are unharmed, but his body looks like he was exploded, decapitated head watching over them.

Based on personal criteria, Takako and Sakae might be considered either deep or shallow characters. Both girls are half driven by two goals that Yamazaki seems to lampoon, which is Takako’s desire to be a pop celebrity and Sakae’s dream to marry into wealth. Takako’s often states that she is a “modern girl” and that she is motivated by being better then everyone around her and that fame is what is most important, where Sakae just wants to live a carefree life. But they are now half human half fish monsters, and the two girls are both in turn motivated by bloodlust and immense jealousy. While it is refreshing to see the two parody pretty shojo heroines while at the same time literally vomiting at their disgust of other people, it’s hard for them to develop as characters when tentacle murder and a sea based escape can reset the status quo.

Starting with volume two, Octopus Girl includes extra stories that drastically depart from Yamazaki’s satire and screaming faces to what feels closer to the girl headed horror stories seen in Kazuo Umezu’s Scary Book series. What makes the stories stand out as odd is, compared to Octopus Girl’s often four wall breaking jokes, these stories are often completely straight forward and often normal. Many of them are retreads on stand-alone horror stories, like the slit-mouthed woman and one about a ghost with a decomposing face. In a manga where bugged out eyes and vampire bites the size of golf balls riddle the necks of corpses are routine, the weirdest thing is when Yamazaki has an otherwise standard drama story with one single instance of extreme violence. They are not always as emotionally resonating as he thinks they are, but the slid-mouthed woman story does have a sweet message at the end about overcoming childhood trauma.

Pros: Not afraid to make its satirically pretty protagonists out as gross and spiteful, as no one stays lovely when they are vomiting up seawater or eating people whole. Toru Yamazaki’s art, while a little too held in Umezu’s and Hino’s works, does have its good moments in areas like the experiments in character expression and the color work on the covers. Features some top quality gore, the kind of great filth that causes your eyes to just linger.

Cons: Often gets completely derailed by its own pop culture or scat-based humor, where entire jokes fall flat because excess does not always mean quality. Overuses settings, like when Takako attends two different high schools. It is hard to develop characters when they can just jump back into the ocean when things get too murder-heavy.

Like Lullabies from Hell before it, Octopus Girl was released by Dark Horse. Octopus Girl starts out as Toru Yamazaki’s comedic ally charged admiration for the works of Hideshi Hino and Kazuo Umezu, but even later visual flares reminiscent of Akira Toriyama don’t save Octopus Girl from feeling like it’s running on fumes even at three volumes. A treat for horror fans, especially those who get the inspiration, but as someone who should adore Octopus Girl’s slimy beating heart; it’s just ends up as a weird experiment where my admiration for its existence far outweighs my overall care.

Like Loading...
‹ Mobile Police Patlabor – The Early Days Review: Is It Just A Job?
5 Centimeters per Second Review: Also the Speed at Which My Patience is Dropping ›