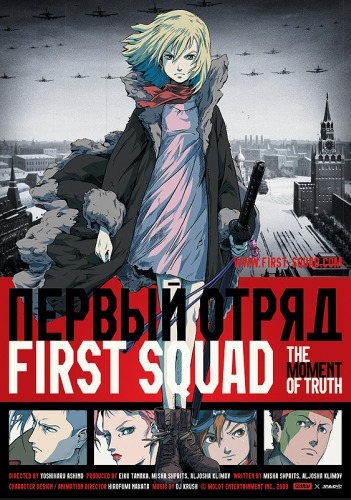 World War II, so ingrained into the psyche of pop culture that even to this day we are still reading, playing, and watching media based on that time in world history (not just Coach Dunn’s 2A class). Recently, fellow writer, (Kakyoin from Jojo’s Bizarre Adventure Part 3 wannabe) and site co-founder Franklin Raines and I watched 2013’s Frankenstein’s Army. It follows a small platoon of WW2 Russian soldiers as they do recon in enemy Nazi territory, when they receive a distress signal and march deeper and deeper behind enemy lines. Upon arriving at the signal, they are met with stitched together creatures made of flesh and metal. These amalgams of clamps, propellers, and helmets pick them off slowly in a “found footage” horror film that mixes real world events with fanciful aspects. This revised history story of Russian Soldiers warring against Nazi mysticism and unworldly terror can also be seen in the 2009’s anime First Squad – The Moment Of Truth, so how about I review that.

First Squad is a 2009 coproduction between Japan’s Studio 4°C (Memories (1995) and Tekkonkinkreet (2006)) and Russia’s Molot Entertainment. It is directed by Yoshiharu Ashino, who also directed parts of Tweeny Witches, Kimagure Robot,and Hanamaru Kindergarten. It is written by Aljosha Klimov and Misha Shprits, who both worked on the 2011 documentary Woody/before/Allen. First Squad takes place during the Second World War in 1942 Europe.

First Squad – The Moment Of Truth follows Nadya, a fourteen year old blonde Russian girl who has lost her memory and is now roaming around Russia trying to survive the Second World War in 1942 Europe.. Currently, Nadya is traveling in a performance troupe across the snow-covered Eastern Front performing for their solider comrades. Nadya’s act involves her being blind folded and using her psychic abilities to answer questions the soldiers ask her. After one of them asks Nadya how much time he has left to live, she uncovers her eyes to find all the soldiers still very much alive, but riddled with bullet holes. Before Nadya has time to react to the grotesque sights, squadrons of Luftwaffe fly in and start bombing their little encampment.

After nearly escaping a blast that would have normally killed her, Nadya is the only survivor and later is luckily saved by a kind old man from the freezing cold Eastern Front. We find out that Nadya is the only survivor of a special squad of psychic soldiers that included her four friends. The Russians had been training these soldiers not only to help turn the tide of war in their favor, but also to combat the Nazi’s occult operations.

Like in other properties; the Fallout games,parts of Hellboy, orthe previously mentioned Frankenstein’s Army, First Squad is part of the popular genre of fiction called “Alternate History/Reality”. For those of you who may not know what I’m talking about, “Alternate History” combines real world events, people, and places and then throws them off course to the birth a new world. It’s another reason I so readily compared Frankenstein’s Army to First Squad: the World War II-era interactions with the paranormal and killin’ Natzis! First Squad features uses the real world Nazi institute Ahnenerbe as the antagonists. Over the course of the film, Ahnenerbe resurrects the fictional character Baron von Wolff, and the Teutonic Knights of legend, who Ahnererbe wants in order to help win the war. Ahnererbe’s plot implements well enough to be believable while simultaneously throwing you into a state of confusion for the period.

The problem with First Squad is that it feels like an old T.V. anime compilation film, with Mobile Suit Gundam, Galaxy Express 999, and Fist of the North Star The Movie coming to mind. What I mean is First Squad feels rushed to tell one grand story but leaves out much of the meat. We get flashbacks to Nadya at her military school and see her bond with her four close friends and future squad mates; but then it simply jumps to modern time with her trying to stop the Baron and his knight army. The school flashbacks could have been a sequence of events in episode two of a short OVA series. It doesn’t give enough time to establish the relationship between Nadya and her friends, so their deaths are meaningless since they come back later in the film. First Squad also feels awkwardly segmented and it ends up making the film feel lacking in needed substance. This is especially big for the ending. To give an example, I saw the Cyborg 009 CGI reboot film, 2012’s 009 RE: CYBORG film, with Franklin Raines. We initially thought 009 Re: CYBORG’s was but the first in a trilogy of films, where this first film was setting up their angel skeleton world for something much grander to come. Like how nothing came of 009 Re: CYBORG’s cliffhanger ending, so does First Squad’s ending not resolve big plot points like thus leaving me unsatisfied and disappointed.

Pros: First Squad is a nice change of pace by not taking place in Japan and being set in west Russia. It has concepts that are interesting to watch alongside a World War II backdrop, the occult institution of Ahnenerbe, the psychic powers, and traveling to the world of the dead. Character designs are unique for those who aren’t just cannon fodder, like the group of soldiers Nadya encounters in the beginning of the film. First Squad’s use of filters and grainy effects in the flash backs and in general are a nice added touch.

Cons: First Squad’s two main problems stems from the ending of the film, and the missing substance I get when watching the story unfold. The story ends unresolved and setting up for an even bigger battle, the lack of substance makes caring about certain characters hard or nonexistent.

Studio 4°C and Molot Entertainment’s First Squad hits a cord for me. I’m a sucker for period pieces, specifically one set in a fictional World War II (here’s looking at you, 2011’s Captain America), as I often find myself romanticizing this specific time and place in history. While First Squad does a relatively solid job on blending fantasy and fiction, it does seem unbalanced in telling its story, with the feel of a too-packed OVA and the ending hold First Squad back. Despite those two problems I would recommend First Squad for those of us, like myself, who enjoy World War II “Alternate History” stories like Inglorious Bastards, Hellboy, and even Frankenstein’s Army.