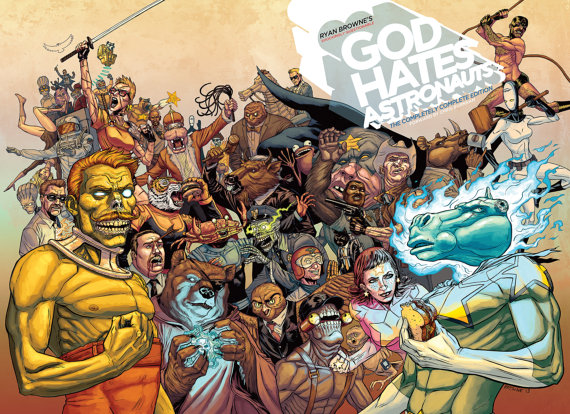 My glorious plan to cover more Kickstarted (Indigogoed and etc., pick your favorite) comics as of late have hit a few snags. While I am not about to deeply ponder the Service Life Cycle of crowd funding, I believe enough time has passed where certain expectations are met. Biggest one in my mind is the actual arrival of the rewards. Kickstarter modeled crow funding unfortunately veered from a place to support people’s creative ideas, like a charity, to becoming a place to preorder comics and video games. When your greatest investment is getting a thing in the mail or an emailed download link, you really pay attention to the average three extra months it takes to actually ship out. While I can by no means change what Kickstarter has become, I just wanted to mention Chris Burnham’s (writer of the web comic Blast Furnace) comic God Hates Astronauts arrived on time…practically a year ago.

In a world where the real life first American heavy-weight boxing champion John L. Sullivan is still alive and kicking, justice is needed. Sullivan plans to reclaim his title by way of grizzly bear army, a ploy foiled when the super hero team called the Power Persons Five arrives. Constructed of five people: husband and wife pair Star Fighter and Starrior, Craymok, the Anti-Mugger, and the Impossible; the Power Persons Five use their great (mostly just punching really hard) powers to stop Sullivan before he can start. But not without a price. See, the Power Persons Five’s leader, Star Fighter, is a glory hog who takes it upon himself to fight Sullivan one-on-one. Now Star Fighter’s an immortal flying man with space hero in his veins, but that doesn’t mean he’s invulnerable to Sullivan beating his skull into mush. 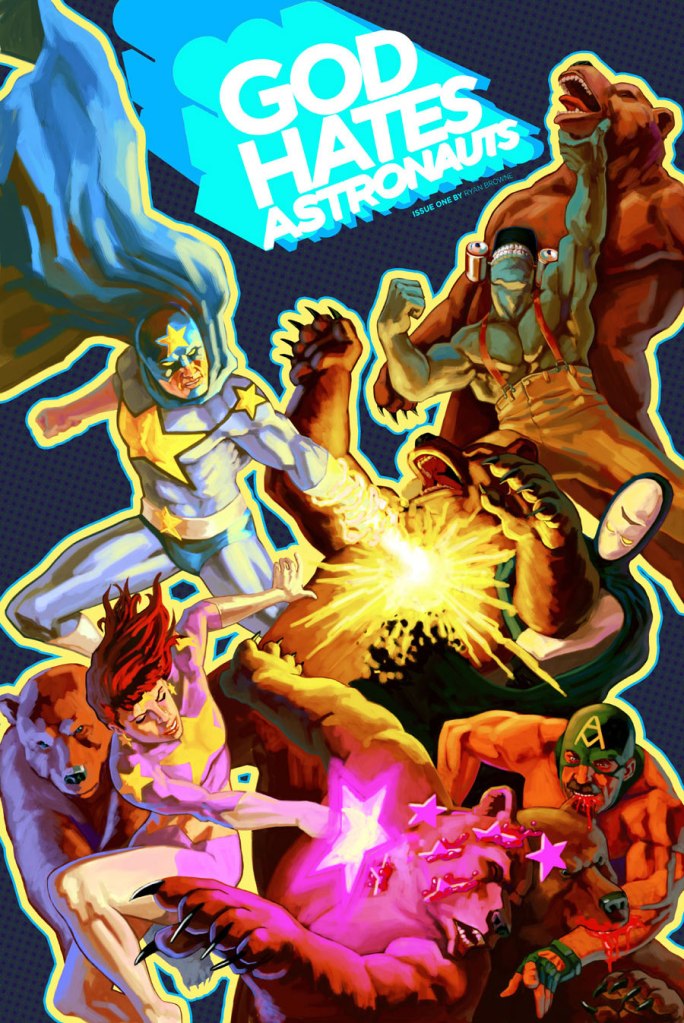 With a unfixable head swollen up like the mother of all mosh-pit beach balls, Star Fighter, real name Bill, and Starrior, real name Stacy, have to adjust to Bill’s new “condition”. Unfortunately, couples group counseling only makes things worse when a fellow named Texas Tom the Deformed Cowboy convinces a stressed Stacy to cheat on Bill with him. Bill finds out, emotionally blows up, and figures his role as Power Persons Five leader means he can rally his team mate against Stacy’s affair. I could say GHA is about how the Power Persons Five are actually endorsed by NASA and its financial interests, about how Carl Winslow from somehow both Die Hard and Family Matters is getting over cop-PTSD and having his arms replaced with bear arms, and about how the following animals: a hippo, a bison, and a rhino, became a NASA owning king, a judge, and a Dr. Professor respectfully. 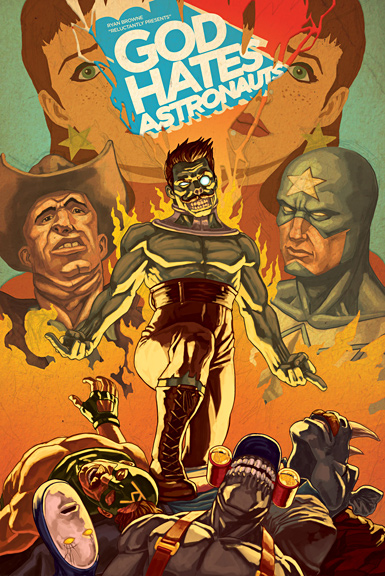 No, God Hates Astronauts is simply about a young married couple getting over and adapting to great physical, emotional, and sexual change. At the same time, galactic space tigers plot Earth based invasion and Sullivan returns for evil like a Saturday morning kid’s cartoon villain.

God Hates Astronauts’ has this “throw pasta at a wall and see if it sticks” approach to its characters. I mentioned that GHA is at its core about Bill and Stacy’s struggling marriage, so they get flushed out the most. Bill’s a pig-headed (hah, ironic compared to what happens to him later) jerk who just happens to have an endearing gullibility to him that’s makes up for it. Initially, and this can be levied to GHA’s short length, Stacy appears to be an easily unfaithful snark of a woman. I mean, this is a woman who cheated on her husband for having a gross messed up head with another guy with a…gross deformed head. Okay, that doesn’t make a lot of sense, but Stacy is later revealed to be caring, just pushed to an unrealistic limit.  Because GHA web comic origins means it relatively short, characters get introduced, for instance Carl Winslow’s lady friend Crazy Train, get to say a few crazy things, then get killed off as a joke. Like the spiritual successor to an episode of Justice League, a person’s quick appearance and short wise crack is all you get. The extensive multi-artist origin stories found at the back better serve these one to two joke superheroes and public officials better than the comic itself. 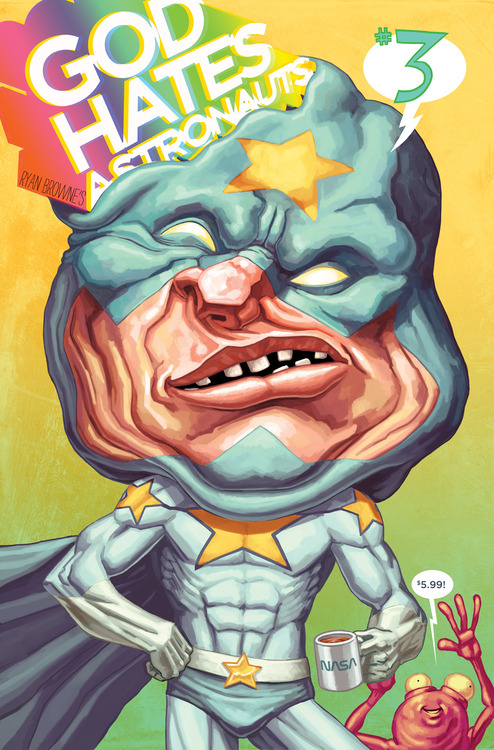 Which leads me to another realization; GHA is the superhero themed coffee table book equivalent to all those “art for art’s sake” comics I like. Hear me out. I have the hardcover, lush full colored illustrated edition filled with the previously mentioned origin stories, a ton of great pin ups, and a 24-hour comic Chris Burnham added for the Kickstarter. In a way, GHA sits on the border between a lush artsy Drawn and Quarterly collection and say, this big coffee table book of all the Brian Bolland contributions to Judge Dredd sitting next to me. GHA  works on world building by way of sporadic randomness. Like an over the top art comic, whose biggest wish is be a monthly comic put out by Image Comics.

Pros: Gorgeous color work from zombie Sullivan’s teal green flesh to the purple in Bill’s swollen head. Goofy funny humor is often right on the nose. The character origin pages are the best part (no, I didn’t just Kickstart this because Luther Strode artist Tradd Moore drew one of the origin stories…shu..shut up.) GHA has a neat approach to world building, where owl mafias and mummy bailiffs are as common as cloudy skies in Chicago.

Cons: Dialog often tries a little too hard to be funny and it just comes off as forced. Thinks it’s weirder then it actually is, but not every reader is as jaded as me. Stacy and Bill are initially and still sort of by the end, terrible people. Just ends abruptly when big things were about to start getting good.

When you get down to it, God Hates Astronauts is a fantastic “this is what comics can be” project. But I don’t think it’s the next coming of comic space Jesus or anything, as it feels more like the younger (older?, it did sit around in publishing hell for six years) louder brother to comics’ actual next space Jesus, Saga. Image Comics has a paper back of what might be the whole “run” (as of this writing, Ryan Browne has updated on continuing GHA). If you can spare the extra ten bucks (and simply finding a copy) and identify more as that Drawn and Quarterly crowd, I say get the hard cover for your coffee table. The hard cover even has UV spot coating, that thing where parts of a cover glisten, on random stuff like everyone’s bitchen (i.e. Carl Winslow’s) mustache. What more could you want? Go check out God Hates Astronauts.