Home › Manga › Utsubora – The Story of A Novelist Review: Some People Could Call Being Mysterious A Personality

Utsubora – The Story of A Novelist Review: Some People Could Call Being Mysterious A Personality

Utsubora (full title: Utsubora The Story of A Novelist)  was created by Asumiko Nakamura, a crazy talented mangaka known for a ton of untranslated Yaoi manga that I doubt most of you reading have heard of like Middle School, Third Year and Anata no Tame nara doko Made mo. Nakamura also puts out tons of fantasy one-shots like Atalte To Adarte and the short story collection Le Théâtre, a book which would be nice to see get a Kaoru Mori: Anything and Something hardbound treatment (Utsobora is also considered one of her one shots).

The story begins with famous novelist Shun Mizorogi receiving a phone call about a woman he knows and learning from the detectives’ voice on the other end that she has died. Handsome even in his older age, Mizorogi leaves his old fashion home in his old fashion robes to meet with MBA (think Japanese FBI, but more cop oriented) detectives Mochizuki and Kaiba at a local hospital to discuss what the two detectives consider to be a suicide. While in route, Mizorogi notices a familiar dark-haired woman that looks identical to the dead woman in question, Aki Fujino. The death is then investigated by the two detectives, where the older and gruffer of the two named Mochizuki explains how the body on the hospital gurney is Aki Fujino, a young woman who before killing herself by jumping off the top of a building, was a big fan of Mizorogi’s books. With her head smashed in, the detectives’ only real clue is a cellphone with only two contacts: Mizorogi and the woman located outside, Fujino’s twin sister Sakura Miki.

After Shun finishes with the detectives, he leaves the hospital with Sakura Miki, they then discuss Miki’s sister at a local café. We learn that Mizorogi has been keeping himself busy writing a monthly book entitled Utsobora. Mizorogi knew Miki’s sister Fujino through private publisher parties Fujino would sneak into, often dressed to look like a character in one of Mizorogi’s famous novels. As a writer of books described later on by Mizorogi’s old perverted publishing friend Yatabe as “hoity-toity smut”, Mizorogi’s eccentric writer persona interests Miki. Miki and Mizoragi start going out, but something bothers Mizorogi, as considers the idea that Miki is in fact Fujino, leading him to distrust this woman he barely knows; a mystery to not only Mizorogi, but to even maybe Miki herself. All of this happens at the same time as Mizorogi’s new editor, the young looking but older in approach Mr. Tsuji (also, a fan of Mizorogi’s previous work), learns that Misorogi might be plagiarizing his latest literary darling Utsobora.

As a drama, Utsubora’s features rather realized characters, which in a way thematically split the story. Let me explain: the manga is divided into two realms, one a down to earth story of regular people like Mizorogi’s live-in-niece s who is concerned about her spacey uncle, Mizorogi’s previously mentioned publishing friend Yatabe who secretly pines for Mizorogi’s success as he grows old, and Tsuji delving deeper into the dark secret of Utsubora’s real creator, all the while coming to grips with the fact that his personal hero might be a fraud. Real people expressing genuine emotion like concern, envy, and fear of betrayal as they go about their everyday lives. Common in what is often depicted in Josei manga. In comparison, Mizorogi and Miki are too romantically fanciful that they exist outside the norm, in their own world. One could argue that this level of blocking out the rest of the world by simply ignoring it is a realist portrayal of two people falling into a physical to almost emotional sexual connection. Problem is, Miki’s specific near-perfect portrayal of a living embodiment of one of Mizorogi’s fictional characters means she’s so detached from everyone around her, that watching her talk with other people is like asking artist Salvador Dali to describe himself. It becomes more about being in her own head as she plots out the lie of a life she lives. 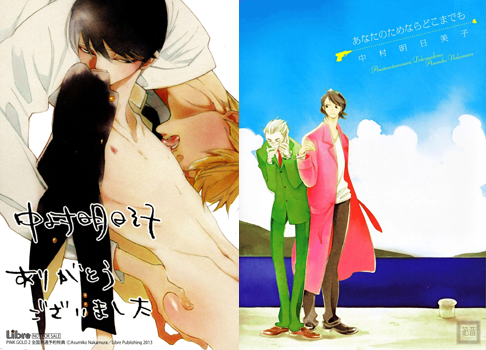 Asumiko Nakamura’s artwork works on multiple levels moving beyond simply looking gorgeous. On the surface, her character designs appear to be rooted in that Yaoi stronghold of lanky frames and long facial features. Hands down, speaking as a heterosexual male, Mizorogi is one of the most attractive male character designs I have seen in ages. His small mustache, held up by those around him as a symbol of his eccentric tastes, accents his older fashion sense.  Nakamura will distort the human form even further then the Josei norm, going as far as to draw her female characters naked like flesh covered “S” shapes. Best part of all is how she knows how to show and not tell. A personal complaint I have with Josei is how chatty the dialog becomes, with characters explaining everything that goes on. Nakamura on the other hand, has certain moments where a single panel with a later quick comment explains an entire chapter’s worth of characterization. She also succeeds in a similar way in showing people’s emotions through how they have sex, treating intercourse and intimacy as a mature aspect of adult interaction instead of simple titillation.

Pros:  A story deep with actual adult experiences like losing oneself to passion, envying the talent and success of a close friend, and fear that one’s greatest artistic achievement is behind them. The gorgeous artwork not only creates a visually pretty sex heavy world, but a world where sex and temptation are realistically presented as more meaningful then just alluring. The character Yatabe might be the best part of Utsubora, starting as a one-dimensional wise but perverted older man whose aged friendship with Mizorogi is the most heartfelt moment I have read in a manga in quite some time.

Cons: Even after reading it all the way through twice, I still am fuzzy on Sakura Miki’s real identity. The addition of a third woman related to at least one of the sisters, the mentioning of plastic surgery only, and the jumping back from flashback to the now only adds to the confusion. Once I felt that I was reading two different, sometimes connecting, thematic narratives, I could not stop seeing Miki and Mizorogi more as self-conscious actors on a stage then real people. Miki is just too perfect a fictional character in a world where real people are supposed to exist.

Vertical Inc. published Utsuobora earlier this year in a single volume. Utsubora is not for everyone. From its non-linear narrative, to the complete confusing mess that is the overarching mystery of Aki Fujino and Sakura Miki’s real identity, Utsuobora is by no means perfect on a first read  and prevents a quickburn through we get used to on many manga. Once you slow down your pace, and notice all the stops along the way to the end of the journey instead of the destination itself, you can see that Utsuobora is a perfect example of a work that uses adult elements trying to be for adults. If I ever cared to make a top ten list, you could bet that Utsuobora would be in there somewhere. A fantastic read for anyone looking for not only for manga meant for adults, but for a great manga in general.