Enough time has passed that many of my Kickstarter-funded comics have arrived and accumulated at my residence. Meaning, be expecting me exclusively to be on full indie-comic and self-published comic mood for the next few months. Yes, I hate the word “indie” too; this divider word denoting a comic’s scene appeal like a modern day marketing equivalent to the word “graphic novel”, meaningless to a man who just calls everything a comic (I like the French approach, general artist Alejandro Jodorowsky once mentioned on how in France they call everything a “comic” instead of America that like the full name “comic book”). Time to start with 2013’s Papa.

Papa is a father-figure themed comic anthology headed by writer Vera Greentea, founder of Greentea Publishing, a publishing outfit that my light research has revealed exists squarely from crowd funding through Kickstarter. With an original intend for a release date around an American Father’s Day of 2013 (Vera even offered hand-signed Father’s Day cards as reward incentives), and while the comic itself did not arrive until almost a month later, Papa’s three-storied narrative break on three individual fathers is meant to honor Vera’s own father, as well as a personal stab at releasing longer self-published comics.

Disheveled Professor Mortimer Black lives with his wife Angela and son Mortimer Jr. on a hilltop overlooking a beachfront. One late evening, Mortimer Jr. discovers the body of real-world super hero, The Tempest, dead on the shores. Coincidently, Professor Mortimer has been acting as a sort-of unofficial biographer for The Tempest, elated that his own son has helped provide the introduction to over three years of writing. But will Professor Mortimer separate his academic pursuits from being the father of a child who just witnessed the death of a personal hero?

Drawn by French artist Joseph Lacroix, who also drew a rather visually distinct comic based on the PC game Diablo called Sword of Justice, Papa is filled with heavy line-shading and moody colors like teal and faint yellow. Professor Mortimer’s dialog towards his son is interesting, denoting an academic mind when he shows actual insight into the way his son mispronounces the word “stroke”, when discussing The Tempest’s death. I had to read the ending a few times to feel that it concluded, as it left me feeling like it ended one page too soon. 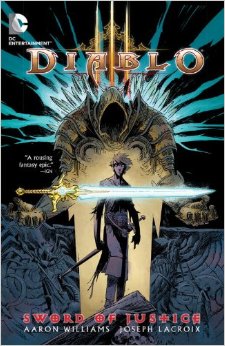 The Princess and the Robot

The semi-futuristic Kingdom of Arr is forced every day to sacrifice one child to the Country of Ka’s robot, as it is the only means for peace between the countries. This continues until the Country of Ka pushes the point, sacrifice the King’s only daughter and end the fighting, or the Country of Ka will destroy the city of Arr. With the aid of his kingdom’s engineers, the King of Arr oversees the genetic splicing of stegosaurus DNA with his daughters, all while hounded by a military commander who suggests using her for war and the general guilt of turning one’s own daughter into a monster to save her own life.

Ben Jelter, creator of the recent comic Moscow 38, designs the Kingdom of Arr citizens in an auburn and brown mix of military uniform and peasant wear, a Queen with blue fire burning at the end of twin tails, and an on-going single eye motif. The best visual example that The Princess and The Robot has at being a science-tech blended off-shot fantasy is the tank treads and leech mouth of the Robot of Ka itself. Features nice commentary on potential conquest over family connections in the chance of requiring a super weapon. 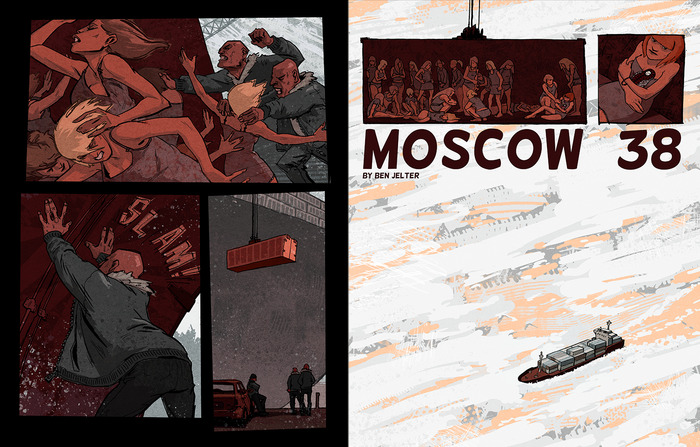 Theological Astronomer Set and assistant Mil are two men that ride jet-packs in post-apocalyptic skies, researching the possibility of a Heaven past the dark sky landscape that engulfs the planet. Working constantly as his wife Yova takes care of his sick daughter Annabella, Set feels pressured by his families’ limited time left on Earth to discover if Heaven could be real. And if it is, does it relate to the local animal mutations, specifically the titular nightbirds.

Artist Lizzy John renders the post-apocalypse with the classic desert dune, entombing local suburban houses, with a darkened cloudy sky blocking out much of the sun. Her designs shine the best in regard to the nightbirds themselves, these combinations of classic griffins but with male human hands and faces that remind me of the Muppet’s. Fitting, since Lizzies’ known for her work on the recent Fraggle Rock comic. Nightbirds even tries to pull off the nightbirds as creepy, with quick panels of a nightbird hiding on a ceiling when Set visits with his daughter and a fantastic panel with the perspective underneath an arguing Set and Mill as nighbirds can be seen circling the skies through the skyline window above Set’s kitchen.

Pros: Understands that an anthology is a perfect place for short stories, test-out-interesting-concepts segments, and strives to keep everything separate but genuinely different. Total story count is low enough that Papa is able to escape the trappings of all anthologies ever with a needless segment that seems to not fit with the rest; thus equaling a general total effort of high-quality.

Cons: Like the early CMX volumes of From Eroica With Love, Papa’s binding is so close that I had to put extra effort in pulling it open to read certain text balloons to the point I felt like it was going to break the spine. On first read, Papa and Nightbirds seem to end one to two pages too early.

Papa as far as I can tell is only being sold through Vera Greentea’s publishing site. Now comes the format dilemma inherit of anthologies of any nature (live action or animated film, proses, comics), which is the intended audience. Because of their length, anthologies like Papa work separately from long-running on going comes and even self-contained omnibuses; to the point where I feel the audiences are different on that fact. Since I like to pretend everyone reading this could place themselves in the same category of “if it can be called a comic, you have my attention” as I am, I will just move on and recommend Papa for what it is; a well-executed combination of story concepts, diverse art, and narrative theming.

Like Loading...
‹ Merantau Review: Caught Between a Rock & a Hard Place
King of Thorn Review: Sleeping Beauty Based Science Fiction ›