Home › Film › Drop Review: Like A Kick To The Gut That You Know Connected

Drop Review: Like A Kick To The Gut That You Know Connected 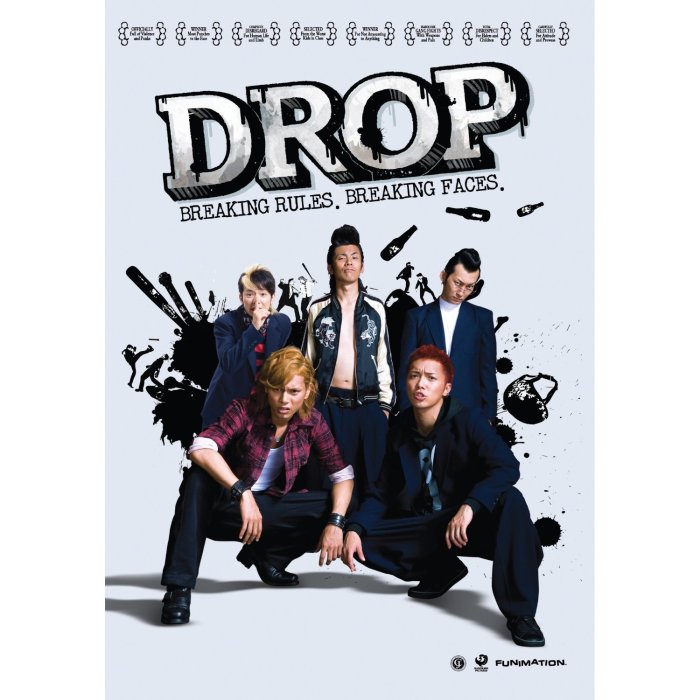 In Japanese culture dating back at least a few decades, the role of a middle/high school delinquent is often characterized by often skipping class, getting into fights, chain smoking, and generally trying to act like a bad-ass. The image of a twenty–something looking high school scholar sporting punch perms, brandishing bokken swords, and kamikaze jackets is so well known that they seem to be the goofy but endearing equivalent to the American urban youth gangster. But somehow Japan found a way to turn these figures into an almost romantic fighting spirit that can be taken separately from its American counter-part. 2009’s Drop is perhaps the best recent example of a Japanese film that tries to add a comedic tint to the delinquent world.

Drop was the first full feature film directed and written by Hiroshi Shinagawa, whose connection to Drop is actually quite interesting. Drop was originally a manga series, as from what I have read, is an autobiographical depiction of his life. The manga’s character designer Hiroshi Takahashi has his work inserted throughout Drop, fitting since his past work Crows was adapted by Takashi Miike into Crows Zero. A little off topic, but I bet I could cover Crows Zero as a companion to Drop in the future. Outside of even writing the script for Drop, Shinagawa went one step further and adapted his novel Slapstick Brothers into his latest film of the same name. Neat how films like this one find their beginning.

Cocky Hiroshi Shinanogawa is starting a new middle school life. He has quite the daunting dream, a dream of being reconstructed as a delinquent. After breaking up with his girlfriend, switching from a private to public school, and dying his hair cherry red, Hiroshi is ready to act out and show everyone how tough he can be. So what do you do to garner attention and to demonstrate your worth? You confront the son of an ex-yakuza Tatsuya Iguchi and his gang, get called out for being a delinquent poser, find yourself beat to hell by Tatsuya’s crazy need of brawling with anyone in front of him, and finally get accepted by not backing down when you should and get asked to join them for ramen.  Adolescent boys, where complexity is not their strong suit. 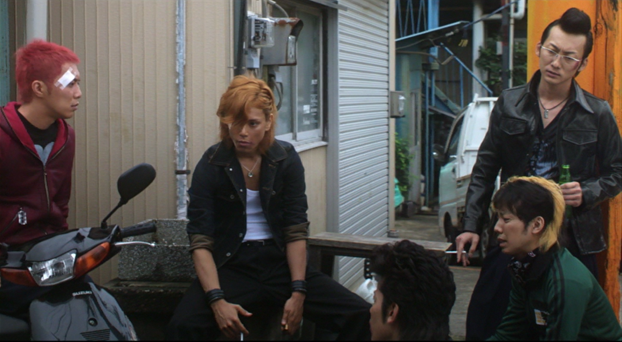 Most of Drop follows Hiroshi and his new gang of friends: strategist Moriki, thief Lupin, resident-crazy Wanko, and street fighting leader Tatsuya.  It follows their adventures as nine grade delinquents. When they are not eating out, smoking, or getting into fights with local schools, they really just hang out. But not all is happy in the land of being a delinquent when biker gangs like the Devil Soldiers constantly ambush you. Fighting to protect your gang’s honor is hard enough, but when the harsh reality of growing up and seeing how your actions dictate your future makes life even more difficult. Hiroshi is going to have to learn from his sister’s boyfriend Hide that your actions have consequences that can affect the people around you more then you expect.

As you would expect from a film that parodies the Cannes Film Festival olive branches with brass knuckles, Drop is all about its street brawling. What is nice to see is just how distinct street fighting of this nature looks in live-action. You get your fill of swung pipes and sticks, body tackles, and gang ups here, and it all looks so elegant. The best part is just how far the choreography will go to show you how strikes connect. For instance, during the restaurant ambush when Hiroshi and company are beaten and flung across bits of broken window by new member of the Devil Soldiers, the feel of their backs running over that glass just stings the senses (I know that the window could have just been made of sugar or they had Passion of the Christ level padding under their uniforms, but that feeling is still there). You get a visceral feel for when someone gets hit in this film that goes the extra mile to keep its theme.

I mentioned earlier that there is something about the Japanese delinquent that evokes different connotations from entertainment then the American equivalent. My theory lies in how the American counterpart sees the drug and violence relation to their society as a way to grow up faster, a means to future adult success. But in Japan, while the Yakuza tend to keep themselves a little less obvious with their dealings, there still is a connection between Bōsōzoku biker gangs and young delinquents. You see stylistic connections emulating adults like the American youth gangster, but it seems that the rebellion is more from an unwillingness to grow up out of a boy’s club and join society (during a late fight montage, the song that is used has the line “Can you stand your whole life being used as a moving gear in society?”). One group that tries to grow up to fast contrasted with one that wants to stay young and controlled by their free wills.

Pros: Distinct fight scenes encapsulating the improvised street brawl mentality. Demonstrates the young man’s notion that enemy today might not mean enemy tomorrow. (I should have mentioned this earlier, but Drop is actually a comedy at heart, drawing on Shinagawa’s comedic tendencies, which often caused me to break out laughing.) Tried to keep me engaged without having to show me that it was trying. Uses panel transitions without being obnoxious about it.

Cons: It is hard to get over how everyone looks like they are old enough to buy alcohol legally, but in the end the characters are not even old enough to drive. The last forty minutes or so take a huge step into conveying drama, and while I felt that it was a fine attempt (if not a little melodramatic), it has the ability to make or break potential viewers expectations.

Funimation, with their underlining stride to release more live-action films, have cherry picked Drop for a relatively new release. This is an aesthetic detailed film that goes the extra mile to be pure fun; it appeals to a feeling of inner strength and freedom that makes you want to throw your fist up in the air. We all need to grow-up and join society by one point in our lives; I just feel that we need films like Drop to remind us of what it means to be young.