One day Franklin Raines and I were discussing what would be the next reviews for the site. He tosses me a DVD case. What I saw was a giant robot and pretty bad ass looking people with guns adorning the cover, so naturally my curiosity was peaked. Reading the back I saw the words “Texas Air Force Rangers” amidst the plot summary, having been in Texas my whole life, this intrigued me even more (I very much like my state). I knew I had to review this film for it had everything I wanted; people with guns, a massive robot with a huge amount of fire power, and was Texas related. The film in question is 1989 Gunhed.

Released in 1989 Gunhed is written and directed by Masato Harada. His other works include Kamikaze Taxi and Inugami. To most Americans, Harada is probably best known for his role in The Last Samurai as Mr. Omura (the slightly pudgy, “monopoly man” looking guy). Interestingly enough while researching this film I found out that the original draft of the script, written by James Bannon, was actually a second place winner in a contest that was held by Toho for a new Godzilla film. Several big studios actually worked on Gunhed, with the most recognizable being Bandai, Toho, and Sunrise.

Gunhed starts off with text and a voice over narration, setting up the world and establishing the atmosphere. We learn that at some point in time a new super mineral was found called Texmexium (I guess I find it more hilarious than most considering CotBF is stationed in Texas). With it, mankind was able to build super computers to help control and power major cities. One of the super computers, Kyron-5, is built on a remote island named 8JO, declared war on the human race in the year 2025. A battalion of gunheds, giant tank esc weapons with massive fire power, were sent to stop Kryron-5 by shutting down the facility housing it.  After a long and fierce battle, they manage to put an end to the rogue machine.

Fast forward to the year 2038 and enter a rag tag group of treasure hunters heading straight for the same remote island, 8JO. We meet a colorful cast of characters: Bansho, Babe, Barabbas, Boomerang, Bombbay, the quiet and laid back main character, Brooklyn (Why their names all start with B is never explained). They are all headed to 8JO, they believe the size of the facility will yield a huge payoff that they can get from salvaging. Their ship lands on the highest point of the complex; while surveying the surrounding area they spot a Texas Air Force Ranger’s helicopter freshly destroyed and on fire. After making their way inside, they meet Sergeant Nim, the only surviving ranger left, who joins them in getting to the core of Kyron-5. Brooklyn and Nim must avoid one of the bio-droids, a defense for Kyron-5 that is extremely deadly, all while trying to escape with their lives. 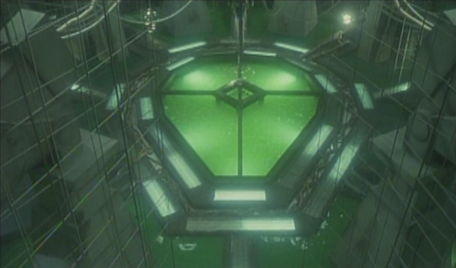 The soundtrack to Gunhed is one of the best parts of the film, with its mix of synthesizers and drum machines combined with a few other instruments. I have played a lot of video games where settings or levels take place in a factory or someplace similar. Chrono Trigger has the best example, with a song from the soundtrack called “Remains of the Factory”. The music mirrors the surroundings, from a desolate island to inside a rundown facility. Gunhed reflects the mood when it is grim the music is usually slow and solemn. When it pans between certain floors or shows the outside of the island, a feeling of isolation infects the music, similar to the levels in Metroid.

Pros: I had a lot of fun with this film, watching Brooklyn overcome his fear of piloting while trying to save the day really grabbed my attention. The sets and costume designs are pretty unique as well, but that is expected when you have Toho backing you. Also how it was shot is very interesting.  It appears that both a film and a TV show type of camera was used. Gunhed seems to switch between the two, which makes it more intriguing to watch. Another part that I found great about this film is the use of English and Japanese. With all the foreign films we watch here at CotBF naturally we set it to the original audio with subtitles. It was no different this time, but I was surprised at the amount of English used, it switches back and forth depending on who is talking and the situation, such as Brooklyn to others or to himself. I never found it a problem though, and it actually adds to the film.

Cons: The major problem I have with Gunhead is the beginning. You get to see this close group of treasure hunting bandits, who may bicker sometimes but are still close friends, enter on the screen and not even thirty minutes into the film (believe me I checked) five out of the six members die. There is no build up, and no time to get attached. I wanted to get to know these five people better; I would have liked to get closer to these characters so their deaths would have made more of an impact.

Gunhed is released by ADV and is still in print,  (I am surprised that I have not found this sooner). The music mixes perfectly with the sets, atmosphere, and the characters all meld together well for an enjoyable and unique viewing experience. It is a fun adventure with a guy and his robot.

Like Loading...
‹ The Thin Man Review: I Am Sorry, But Your Fast Yet Adorable Talking Seems To Have Lost Me
Now and Then, Here and There Review: Make It Rain? ›