Home › Anime › Feature2-Coicent Special: A Mad Scientist’s Life Is Never Easy, Not Even In The Future

Feature2-Coicent Special: A Mad Scientist’s Life Is Never Easy, Not Even In The Future

It is a rare occurrence for short animations to be released on this side of the Pacific. While this is not a tragedy I have personally suffered over; I can see why it is not a readily viable business proposition. Very few people would spend money on a work that they know nothing about, and are offered only a single episode of something that could be great, or terrible, it is a gamble, and not one that would appear cost-efficient. Therefore works like these are often bundled together to make a sweeter deal for the consumers. Such is the case for OVA’ such as 2010’s Coicent and 2011’s Five Numbers.

Coicent was directed by Shuhei Morita, director of the film Freedom and the original creator of the manga Kakurenbo, who had a heavy hand in its film adaptation from being its director to one of its producers.

Coicent is set sometime during the year 2710 (yeah, it is that far off into the future). Everything starts with a high school trip to Nara City; Shinichi our lead is one of the many students coming to visit the city. Whilst there, he meets a pretty girl named “Toto” after a bizarre incident with an albino deer who took his backpack. Toto wants him to show her around Nara City’s famed temples, a perfect opportunity for a date. Unfortunately Toto also happens to be being chased by a bunch of weirdoes and their tiny scientist mother, because Toto is actually their lab experiment and they want her back. 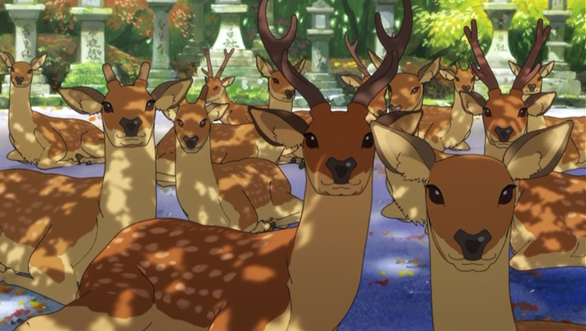 Coicent is quite unusual in various aspects. The most eye-catching  would be the strange sort of 3D CG animation the characters are rendered; to give you an idea, try to think of it as clay animation done entirely by computer (confusing I know, but it is the best description I could think of).

The funny part is that characters keep switching back and forth between this strange CG-style to a more traditional style of animation; though the traditional animation is more prevalent for background characters. Quite frankly, I do not know how I feel about this approach; fellow CotBF writer Franklin Raines attributed the word “experimental” when addressing his assigned segment Five Numbers! and I would agree. Personally I did not like it at first, but a few minutes later I was okay with it, but then went back to disliking it; it just teeters in an odd spot of the uncanny valley. Other than that, the backgrounds are a workout for the eyes; almost all of the backgrounds are filled with color and details from strangely colored Devas and Asuras robots, to sprawling shots of a metropolis filled with buildings of countless design.

Pros: A simple romance between a boy and a machine (Coicent is not clear on what Toto is exactly). The visuals have a very original approach not often seen.

Cons: The plot is about as good as you would expect from something only twenty minutes long. Original as they may be, the visual aspects may turn off a fair amount of viewers.

Sentai Filmworks released Coicent along with Five Numbers! in a bundled release. Coicent is fun to watch, and while it brings some interesting new ideas to the table, I do not feel it is a game changer. It was a gamble yes, but the outcome showed neither profit nor loss.