Home › Manga › Love Roma Review: …Or, How to Write A Romantic Comedy

Love Roma Review: …Or, How to Write A Romantic Comedy 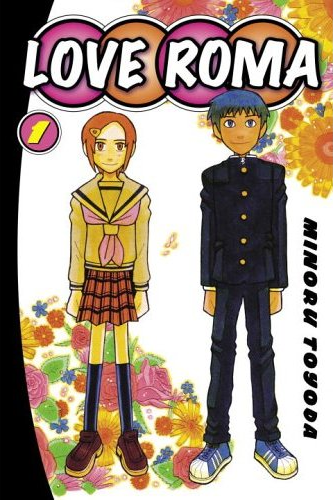 When I first started writing reviews for Children Of the Blazing Fist, Franklin Raines (otherwise known as my taskmaster and evil overlord), confessed to having no way of paying me for my time. He would instead introduce and loan me awesome Manga and Anime. I think he finally paid me with 2005’s Love Roma, a comedic love story about a boy, who says exactly what he is thinking, a girl, who will whack him for ignoring social cues, and their friends, who get a good laugh from their shenanigans.

Love Roma is the first work by Minoru Toyoda. He then went on to publish Flip-Flap and Tomodachi 100-nin Dekiru kana.

Hajime Hoshino is well, there is no other way of describing him as other than blunt. Hajime Hoshino is not only blunt, but clueless. How clueless? He confessed to a girl who did not know him, in front of her classmates, during lunch break. The person on the receiving end of Hajime’s confession was Yumiko Negishi, an ordinary girl who did not expect to be confessed to in public by someone who decided to discard everything they know about Japan’s rules of socialization. Hoshino was about as successful as you would come to expect. However, due to a combination of niceness on Negishi’s part and expectant peer pressure from those surrounding the two; she agreed to walk home with him in order for them to get to know each other. And the rest is history! A pure, innocent, love story about two people as they struggle to understand their feelings in a plot full of drama and deceit. No, Love Roma is the slow, easy-going story about a boy and girl, who grow closer as they get to know each other, spend time with one another, and where one hits the other, when said other completely ignores the time, place, or appropriateness of his words and actions.

While Love Roma is a carefree, easy-going story about the daily lives of two people and their friends, it does not mean that it is bland or lacks ambition. While the pace is sluggish, the story is spent with the characters interacting with one another, leading to the zaniness that comes from their individual personalities, something I would have loved to see in my past review of Midori Days. Speaking of zaniness, the comedy is consistently delivered. The manga relies mostly on Boke and Tsukkomi comedy (a style of comedy in which the boke, “the idiot” will say something stupid, and then is chastised by the tsukkomi, “the straight man”). The overall feeling reminds me of honey, slowly dripping down, rather than small, self-contained sweets. I found myself laughing out loud several times every time I picked up a volume. (Editor’s note: As someone who was personally sitting in the same room when he was working, I can attest that this did happen quite frequently.)

I found Love Roma’s greatest strength to be its cast of characters. To begin, there is Hoshino, who despite processing everything using logic, is the boke in the comedic duo. Hoshino’s outspokenness makes him an incredibly original character within Japanese people and their archetypes, sometimes, his comments and actions reflect his deeper insecurities of not being “completely human” not that he is too angsty about it, mind you. Yumiko Megishi, a girl who, while outgoing, is easily embarrassed, as she usually processes things with her heart, she serves as a foil for Hoshino, as well as a very odd tsukkomi.

To make things more interesting, both Hoshino and Negishi each have a best friend who gains amusement by either directly complicating a situation for the two, or by observing things as they play out. Preferring to directly intervene in the love live of the central couple, Yoko Meguro, Negishi’s best friend, will leave the scene in order to create awkward tension, or stir up crowds so as to embarrass them, well, mostly Negishi at any rate. Toshio Tsukuhara can often be spotted watching Hoshino and Negishi sort themselves out, but he also serves as a (often ignored) voice of reason for Hoshino, when only guys are around. Interestingly enough, the two also become a couple relatively fast, but their relationship is made up of ups and downs, serving as yet another contrast between Hoshino’s and Negishi’s slowly, but steadily growing relationship. There are several other characters in the story as well, but sadly, I don’t have the room to write about them.

Toyoda’s approach to sexuality is quite interesting. At a glance, the manga looks like a pure love story as Hoshino slowly works his way through the bases. Negishi serves as an admittedly hilarious deterrent; there are no explicit or unreasonable displays of affection, but whenever Love Roma hits that landmark, it does so without hesitation or awkwardness. The moments do end up being funny all the same.

Love Roma’s only flaw is its art-style; Toyoda’s work stands out for its sharp-edged, slightly amateurish presentation that is very different from most manga out there. Sure, it is Toyoda’s first manga, and the art does get better as the story progresses.

Pros: A primarily comedic story that knows how to deliver those small moments both sweet and heartwarming; a mature, natural approach to the growing intimacy of a couple. A diverse cast of characters that brings laughs in every situation, just there to round-up the appeal as a whole.

Cons: The slow pace and art-style will unfortunately repel some newcomers looking for a “prettier” or more “eventful” series; albeit, the style will likely grow on you if given the chance.

If you can get past the art-style then you will not have a problem reading through the series’ five volumes; if you can get them. However the volumes can be enjoyed as standalone works, considering the story does not rely heavily on past events for its narrative. When it gets down to it, this is definitely a manga that deserves to be read by any fans of romantic comedies, slice-of-life, or just comedies in general.