Home › Anime › Megazone 23 Special – Part 2: How To Repopulate The Earth With Your Ragtag Band Of Misfits

Megazone 23 Special – Part 2: How To Repopulate The Earth With Your Ragtag Band Of Misfits

Part 2 of Megazone23 starts a few months after the events of part 1. Shogo was defeated in his attempt at a final confrontation with BD (the military commander whom I affectionately call Blu-ray Disc). After his defeat, Shogo apparently went underground to lick his wounds, gathering some of the most varied assortment of lunatics out there in the world of anime (with the exception of maybe team Dai-Gurren) There is Guts, who is basically a bull in a biker’s get up and bad teeth. Lightning, Shogo’s best friend and second in command, who looks like a goofier Shogo with his multi-colored hair and an interesting attraction for Eve, which sort of made me think of an early parallel for Otaku’s obsessed, with their idols and/or waifus. With company like those two, Shogo lies in wait for an opportunity to strike back. Meanwhile, Yui, our heroine has been sitting around waiting for Shogo to appear, like a good woman of the 80’s is necessentially expected. And apparently she decided to get her hair dyed (which may not have been intentional on her part).

Megazone23 has a new character designer, Yasuomi Umetsu.  They appear to be going for a more mature look and feel, the faces look pointier and the hair has a narrower color spectrum overall, so very few people have any sort of unrealistic hair color. Art evolution is not necessarily a bad thing, but I will say that it can be annoying when the characters look just so different that it takes an extra few minutes to reconnect yourself with the story. Yui in particular takes a while to recognize, partly in thanks to the aforementioned dye job, a sharper looking face, and the overall physique of a cheerleader. Overall, every guy looks like a twenty-something Schwarzenegger in terms of muscle mass and size but are thankfully varied in overall looks, like Guts who is about as big as a hippopotamus and twice as round. Shogo, who has more lean muscle which makes him look well-rounded. Then, there is a psychotic, nerdy-looking dude with a lab coat and headphones on all the time, in charge of computer work, who I can’t quite recall if he was ever named.

The animation did not seem to fare quite as well this time; whenever backgrounds are involved the movie goes for photorealistic styles, the buildings actually look like they were made of concrete, plants are realistic shades of green such as in the hideout for Shogo’s gang, an old abandoned building with cracked walls, failing electric wiring and the like. All of this would be great, if it weren’t a different style than the one used when there are some characters involved. Take for instance the outlook of the biker gang’s “stronghold” then take a look at its insidesand its inhabitants. It is simply inconsistent. Furthermore, during a rather bizarre scene of violent gore in which space bodies are splattered around like they were made out of plastic, filled with ketchup, and about as durable, followed by eyeballs shooting out with a disregard for the injuries themselves. 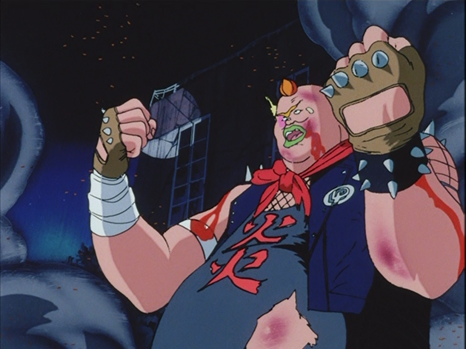 The story managed to stay consistent and kept the characterization of recurrent characters, adding some extra twists and symbolism (the name EVE comes to mind) my only problem is that I would get lost every now and then. The government is fighting it out with another ship, while they are apparently heading to Earth, though this isn’t mentioned. As is expected from his track-record in the first part, Shogo still didn’t get much accomplished this time around either. He gets kicked around, and the Garland is destroyed…again.

Though the fighting is looking a little better, it didn’t catch my attention, mid-sized robots shooting at each other, things explode, people get killed, the usual. It felt like the ending was progressing regardless of Shogo’s actual performance, he gets his ass kicked; he gets to have a conversation with Eve about the nature of the ship. The big bad has him surrounded and at his mercy? Oh they’ll go ahead and charge one last time against the enemy who was beating them, oh and you’re clear to get into the part of the spaceship that will survive the arrival on earth and get your Adam and Eve ending. Speaking of the ending, I was at least a little impressed that the producers had the sense of mind to include several sets of survivors for the whole Adam and Eve plot so as to avoid the unfortunate implications, add in some genetic diversity, as well as some scientific plausibility. But that’s neither here nor there.

Pros: Solid and varied character designs that add fun to the mix when the plot slows down. Characterization is well-kept allowing the story to move well between parts.

Cons: Mostly inconsistent and sometimes shoddy animation brings down the experience from what it could have been. Recognizing characters like Yui, Shogo and Lightning is difficult early on. The plot seems to not require the protagonists to move forward in terms of objectives.

Thus on the whole I conclude Megazone23 part 2 is a good and worthy sequel from its first part. It has a few chinks in its premise, but those are mostly inherited from the original, and were probably not fixable without retconning a large chunk of the first part.