I have a conceptually unique subject to review tonight; a short-story collection of Shojo manga. Now, I am not talking about a collection of manga pilots called one shots, but real honest to goodness short stories. In the past, I used to think that this way of writing was uncommon in modern Shojo manga, and from what I could find, outside of the nominally Josei on the surface works of Moto Hagio’s A Drunken Dream and Other Stories and Yoshinga Fumi’s All My Darling Daughters, I cannot think of any other manga that fit the bill. When it comes to short stories I consider them  to be the norm in horror manga like Kazuo Umezu’s Scary Books, which now that I think about it was also written with a young girl audience in mind. I guess I will just have to add 2005’s Himeyuka & Rozione’s Story to this small list.

Himeyuka & Rozione’s Story contains four short stories written and drawn by Sumomo Yumeka. Sumomo Yumeka has a relatively heavy release footprint here in America, with companies like Digital Manga Publishing releasing her titles like the Day I Become A Butterfly and Same Cell Organism. What I found interesting was that she works under the name Mizu Sahara to draw Seinen manga, like the manga adaptions for two of cloud obsessed anime director Makoto Shinkai’s films, The Voices of a Distant Star and The Place Promised in Our Early Days. 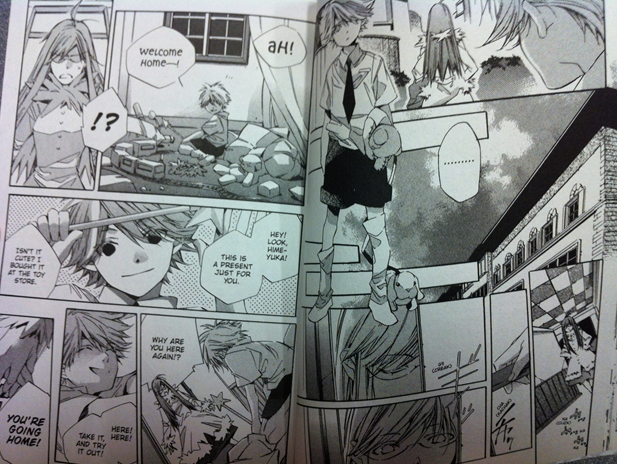 This collection is broken up into four different parts. Himeyuka & Rozione’s Story is about seventeen year old Himeyuka, whose lives in an apartment alone after her parents’ job transfer. As she bemoans her mother on the phone about a box of old toys she used to play with, a young boy named Rozione stops by and overstays his welcome; the rest of the story is about how she struggles to rid him from the apartment. The Princess of Kikouya in District 1 centers around the few days before Yakuza clan heiress Ayano Koujigumi’s arranged marriage approaches, but all she wants to do is spend the time she has left with the boy she likes before her role as heiress truly takes over. My Very Own Shalala entails a half witch named Shalala whose pursuit for increased magical power requires the tears of a young man; which requires her to disguise herself as a high school student to reach her goal. The final story Robot is about a future world where everyone is a resurrected clone that is taken care of by robots and the day in the life of one of these makeshift families.

From what I could dig up, Sumomo Yumeka’s artwork seems to look the same be it for Shojo manga or Seinen manga. The long haired, pretty faced, and thin framed young adults are here aplenty in her artwork; only problem is that now I have to compare her work to other much better Shojo artists. That means that Himeyuka & Rozione’s Story needs to compete with things like Aya Kanno’s Otomen and Nanpei Yamada’s Orange Chocolate (at its best). Now here you do see some rather attractive hair from page to page and the character’s expressions reflect real emotion, the almost iris-less eyes swim around their faces like they have a mind of their own.  But it seems to fail and not be up to snuff.

I do consider, still an exclusively art related subject, I still believe that what I could find of Sumomo Yumeka’s use of color (be their covers or splash pages) deserves its own paragraph. In the entertainment seeking world that I do inhabit, one of the most important aspects of a product is the cover. To be honest Himeyuuka & Rosione’s Story’s cover and its use of what I believe to be watercolors makes it stand out. This trend towards beautiful watercolor covers seems to be a continuous trend in her work that reminds me of the work of Takako Simura. Earlier I brought up her connection to Makoto Shinkai’s films, whose use of watercolors might just be reflected in Sumomo Yumeka’s choice of color.

Pros: Tries to be whimsical like a fairy tale, but unlike in an odd comparison to American writer Serena Valentino and artist Camilla D’errico’s Nightmares & Fairytales, can be understated without going overboard. Now at times a little floaty in its story, there is enough of a sweet payoff at the end (like in The Princess of Kikouya in District 1). Just discovering the watercolor covers is enough to warrant mentioning.

Cons: Inconsistent artwork is a constant distraction. The short story Robot is completely nonsensical and confusing; this makes sense considering that she wrote in the back how Robot was just a separate collection of story ideas she had during a spell of writer’s block. Outside of the earlier mentioned sweetness, the story themselves do not stay significant for very long after you finish reading them.

We have our self another Yen Press title in Himeyuuka & Rosione’s Story. Nice at times but in the end this manga is as forgettable as those scribble-covered dreams denoted so on the back of the book. Fleeting quickly, leaving a little sweetness, but like all candy is just as wastefully un-filling.  In the end it was a nice introduction to what might be an interesting Seinen manga creator to look for, but only reminds me why I continue to move away from Shojo. Not irredeemable but the list of more interesting manga does not need to be so cluttered.

Like Loading...
‹ Le Portrait De Petite Cossette Review: Like Dorian Grey But With A Ghost And Surrealism
Jacob’s Ladder Review: Unsettled By Weird Things That Only Last A Moment ›