Home › Anime › Memories Review: Two Out Of Three Is Not Half-Bad

Memories Review: Two Out Of Three Is Not Half-Bad 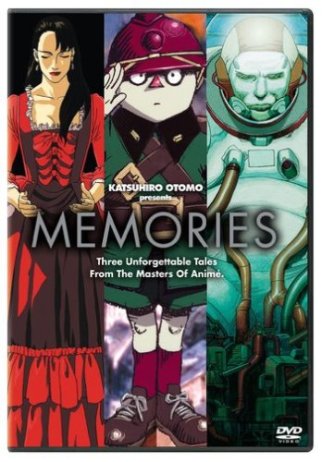 This is the first anthology I have reviewed in my short life as a reviewer, so meeting with some unfamiliarity was unavoidable. For my first anthology, 1995’s Memories was a bit disappointing, yet not  without its achievements.

Memories is co-directed by Katsuhiro Otomo (Akira, Cannon Fodder), Koji Morimoto (Animatrix, Magnetic Rose), and Tensai Okamura (Wolf’s Rain, Stink Bomb).  Now you could find this information on the reverse of the DVD box, but my tyrannical editor demands that I draw it attention, just in that off-chance any of these names mean anything to you.

On the loosest of standards, all three stories in Memories are sci-fi related; but that is where all similarities end. Because this is made up of three separate pieces that stand by themselves, I will split the review in separate parts for each clip and will make my conclusion encompassing the work as a whole.

Magnetic Rose is a story about a team of four men: Ivanov the captain, Aoshima, his co-pilot, Heinz, the more mature half of the salvaging duo and Miguel who is the stupider one of the two; their spaceship wandering the universe as they salvage old debris from older ships. The team accidentally stumbles upon a distress signal, If you have ever watched a show set in outer space, then you probably know this has been done so many times that I am not even going to bother taking off mental points. As this salvaging team moves through a dead sea of ships, they find the source of the distress signal, a giant magnetic rose made out of ship parts. When their scout team, that is Heinz and Miguel, begins to explore the innards of the rose they find themselves on a fancy European mansion owned by an Italian opera singer; this is when things start to get creepy. Despite the surroundings being full of lavish displays of wealth and taste, the film does a nice job of slowly pouring a sense of creepiness that builds over time. Slowly ever so slowly all the members of the crew are being led to their deaths in very different manners, personally I couldn’t help but sympathize with the Heinz who not only did not fall for the atmosphere of the rose but also as a loving father and husband gave us a reason to sympathize with him, yet quite possibly met with the worst possible fate imaginable. 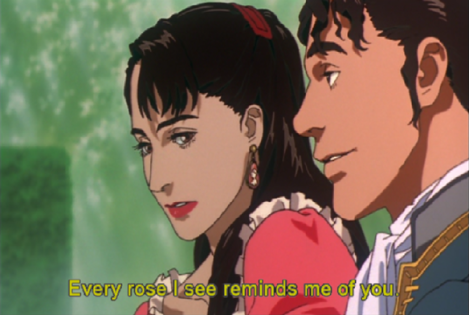 Ultimately the film is rather tragic but no outcome is treated as either bad or good. This subjectivity is perhaps the film’s greatest strength and its greatest weakness, there is no moral compass in this story and you are left to pass judgment on it by yourself. I personally did not like it for its neutrality nor did I feel moved by its character designs. The music does a suitable job of setting the moods of the story but it is not enough to redeem its blandness. In conclusion, I feel Magnetic Rose is a tale you had better dive in knowing you are going to get a bittersweet tale of lost love.

Stinkbomb is my favorite piece of this compilation. It begins with a young chemist seeing the doctor over a pretty annoying cold, who then goes back to work at a pharmaceutical lab. While his colleagues complain about bio hazard contamination, they send him to the office of his supervisor in order to get a new cold medicine, after all other products in the lab failed to do anything about his symptoms. Suddenly feeling groggy, he goes to sleep in a meeting room. What is about to ensue is quite possibly some of the most subtle examples of black humor I have yet to see. As soon as he wakes up, our sick protagonist find every person in a three-mile radius dead, why did this happen? Well, for those of us who like yours truly, know anything at all about chemistry or biology is that you never mix medicines and other foreign substances in your body. What results is often messy, though it usually won’t be as messy as turning your body into walking bio factory of poisonous gas. 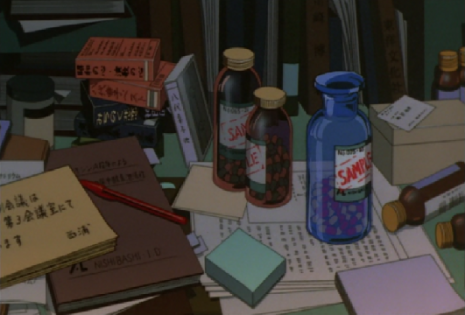 The rest of the film involves our resident biological weapon trying to get to Tokyo under orders from an unwitting superior, who unaware of the fact that he was the cause of the deaths, asked him to bring a particular chemical sample to their Tokyo headquarters. All the while the government makes every attempt to stop him once they put two and two together once the fact that he is the sole survivor of the incident becomes known. The government will then try everything from snipers to assaults by tanks, helicopter and more than a few jet fighters, all of which fails to hit one dude in a lousy scooter. Quite frankly I am quite loathe in revealing the ending to Stinkbomb and will refrain from doing so, let it suffice to say, it reeks of black humor. Visually, Stinkbomb is the prettiest of all three clips boasting the best animation, though I can’t sing as much praise about its musical aspect, it got the job done. 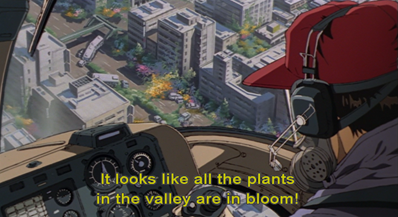 Cannon Fodder is not only my least favorite of the compilation, and to be honest, I hated it. In an unnamed city, citizens work from dusk to dawn making, servicing, and preparing large cannons to be fired at an unknown enemy. That’s it. Cannon Fodder is a normal slice-of-life anime that just so happens to show the people’s lives during war. In a way, it does pay (to a certain degree) a valid commentary on war itself; however it only goes so far. What we see unfold before us is just another day in the lives of these citizens. There is nothing that makes that day stand out from any other. We, the audience learn that the conflict, in which they are so devoted towards, is in the end absolutely meaningless. Quite like watching the segment itself. 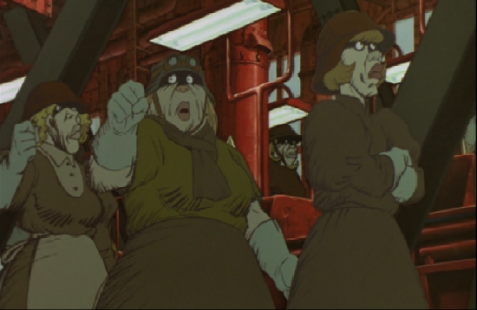 The character designs in Cannon Fodder are plain dreadful. Skin looks like something you just messily drape on to bones for all adults and the children look like unevenly inflated balloons. Both the children and adults have horribly sunken eyes, that in one hand makes the movie deeper in its depiction of conflict, but it doesn’t make it any more bearable to watch. I have seen better things from American cartoons in the 80’s and I would be surprised if someone had the valid, but still stupid idea of using this characters as zombies for some other third-rate film, though there is a rather nice panoramic view of one of the cannons, it hardly makes up for the waste of time watching Cannon Fodder represents.

Pros: Memories features really interesting stories, though with varying degrees of success. The three segments feature some dark humor which can be quite refreshing depending on your usual line-up of anime.  Some nice visual effects here and there, particularly the falling of petals in both Magnetic Rose and Stinkbomb .

Cons: Forgettable music, so forgettable in fact, that I could not recall seconds after hearing it. Less than appealing overall character designs tend to take away the enjoyment from the segments and Cannon Fodder itself is a waste of time.

Overall, with one pretty good segment, one that was okay, and one segment I felt was just horrible; this release hardly seems from the “masters” of anime as the cover would put it. I found it a bit lackluster overall, but if nothing else. Two out of three segments are at least worth watching. So I will not condemn the entire DVD for one lousy segment.