Back in my younger days as an Anime fan; my first Anime Convention was A-Kon 19 taking place the last day of my freshman year of high school. Even though it is considered the U.S.’s oldest Anime convention, nowadays I consider A-Kon to be a multi-media convention instead of an Anime and Manga convention. Taking that aside, A-Kon was originally called Project A-Kon in reference to the 1986 Anime film Project A-Ko. I personally believe that love of eighties’ anime went away with A-Kon’s original intent, with the Dirty-Pair/Makoto Kusanagi mascot designs being the only indicator that it existed. Sadly, the original artist (whose name escapes me), seems to have dropped off as of a year or two ago. But enough of this wallowing for things that were in the past; let’s try to focus on things that are in the present. Coincidently it’s Project A-Ko, so how about we look into what influenced A-Kon’s original staff so much that they name a convention in reference.

Project A-Ko was directed by Katsuhiko Nishijima, director of such fine dreck as Najica Blitz Tactics and Agent Aika. Works that Discotek (the distributor) thought might coerce my buying position. That answer would be no, but in Project A-Ko’s favor I ignored this misstep. Character Designs are by Yuji Moriyama, a character designers on Maison Ikkoku and the Fire Emblem OVA. He also took over directing the various Project A-Ko OVA sequels.

Now about the story, Graviton City is a popular locale that sits in a sixteen year old crater caused by a space ship crash. Instead of building around the ship like in Macross, the city is build right on top and high atop one of the highest spots in the city sits Graviton High, a gated all-girls school that finds itself with two new transfer students. One is the fiery red Eiko (spelled A-Ko in the sub) Magami; the other is A-Ko’s friend Shiko (C-Ko) Kotobuki, who looks much too young to be attending “high school loudmouth”. C-Ko’s overtly childish nature alienates all of her other classmates. All that is, but Biko (B-Ko) Daitokuji, the class brain who finds C-Ko’s childish nature to be infatuating to the point that B-Ko decides to force A-Ko out of the picture, taking C-Ko for herself.

B-Ko sends out one of her friends named Mari, whose physical appearance can only be described as Kenshiro parody, to handle A-Ko. But what B-Ko does not know is that A-Ko has this unexplainable super-human strength and speed that easily defeated Mari, wrecking part of the school in the process.  B-Ko does not give up, so for the next few days she designs and builds robots that her other friends pilot in order to continue her mission. Outside of the school grounds, a suspicious looking investigator reports whatever it’s observation to a space ship looming above the Earth’s atmosphere.  The ship’s inhabitants appear to be looking for its planet’s long-lost princess. Let me just say that the collateral damage that A-Ko is causing will soon break away from those Graviton High grounds. 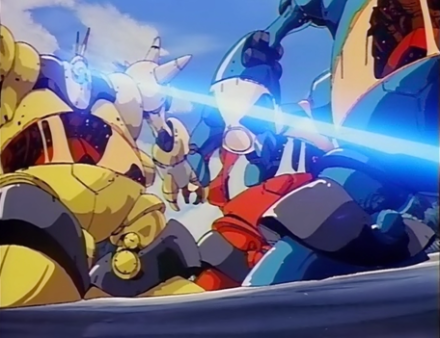 Like many Anime in the eighties Project A-Ko follows the path of series like the Starship Troopers Anime or as covered in my previous review of Area 88,that it was cool for the music to be sung by English vocalists. Main themes “Follow Your Dream”, “In Your Eyes”, and “Dance Away” were all sung by American singers, one of them being Samantha Newark, the voice actress for Jem from Jem and The Holograms. The synthesizer heavy (crazy unheard for the eighties right?) tracks tend to keep a quick tempo to keep up with Project A-Ko’s motion.

Pros: The soundtrack alone rocks hard enough that it makes worth listening. B-Ko’s cool demeanor and genius level of robotics makes her Project A-Ko’s greatest character and driving force. It houses fantastic fight scenes that work solely off of A-Ko’s and B-Ko’s competition for C-Ko. B-Ko’s and A-Ko’s character designs are distinct enough for them to stand out as interesting characters both visually and mentally. I caught myself laughing quite regularly, succeeding at many of its comedic attempts.

Cons: Literally reverse everything above about A-Ko and B-Ko and you have my opinion of C-Ko. This whinny child of a character is part of this comedies artillery that cannot seem to fire straight. When you get down to it, she is the catalyst for all of the conflict in Project A-Ko, and what causes my hammer of agitation to slam is when all of the good characters in a work become obsessed with their lousy counterparts. The leads are constantly off-model to the point that it gets distracting.

Discotek Media’s business model seems to me to be rereleasing past titles that fans like me want to buy (I will stop now as to not sound like an unpaid Discotek advertisement). Best case being the much appreciated flood of extras that were in this release. Spotlights on the production side of Project A-Ko’s creation could be a pro in and of themselves. Project A-Ko was back in its day a new attempt to get a new franchise going (as those countless OVA do attest to), and it’s filled with enough cool concepts and visuals to qualify. But it did not leave me flabbergasted or jumping up on my couch in zealous glee. Watching this alone made this viewing less memorable, something that maybe sharing with others might bring more fulfillment. Thus it is hard to suggest Project A-Koto someone who does not have a captive audience on hand.

Like Loading...
‹ Black Blizzard Review: Hiding From The Past and The Cold
The Other White Meat: Zombie Powder Review ›