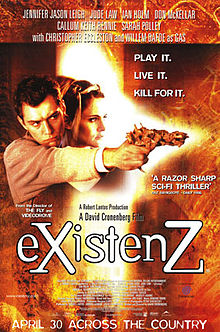 “eXistenZ” is a little movie that came out on April 23, 1999. It stars Jude Law and Jennifer Jason Leigh, with other notable cast members such as Willem Dafoe and Christopher Eccleston. The movie is directed by David Cronenberg who also wrote and directed “Scanners”, and directed “The Dead Zone”. Jude Law plays a marketing trainee who is very innocent and naive that is donned with the task of protecting Jennifer Jason Leigh, a laid back but passionate Video game programmer. She is trying to be assassinated by a rebel group trying to stop her from finishing eXistenZ on the threat of warping player’s sense of reality. The controllers that they use are called “Pods” a very abnormal looking chunk of flesh, which also doubles as housing for the game itself. To connect to the game the use an installed body modification called a “Bio-Port” that is at the base of the spinal cord. 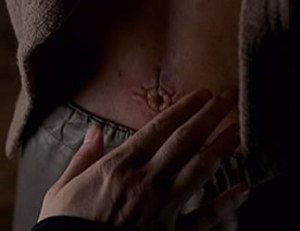 I will start by saying Jude Law does a great performance in this movie. He plays Ted Pikul with such amazing style. Since he doesn’t know much about the gaming world, he will ask questions or make stamens that may seem smart-ass or idiotic sounding. However that fact he is genuinely sincere. Allegra Geller (Jennifer Jason Leigh) is a good contrast to what Ted Pikul isn’t, she constantly takes Pikul out of his comfort zone whether he likes it or not. One of the reasons for that is because she puts a huge amount of sexual undertone between them. When the movie starts, it will not go into great detail of what’s happening and you might seem lost from the get go but as the story progresses it will unravel. “eXistenZ” flows rather nicely; while it may seem like it is close to slowing down, it won’t reach that. The accompanying soundtrack to the movie fits the surrounding environments and actions; it sets a mood of isolation with a bit of cryptic feel. While watching this movie you may notice that it has a vibe similar to “The Matrix” (i.e. plugging into your spinal cord) but it came out a month prior and is probably at best a coincidence. In terms of environment, “eXistenZ” has a varying degree of where it will take you. Each set never seems out of reach or like the film is stretching to find a location. This movie also has CG which isn’t the greatest but does its job well and doesn’t take too much away from the film. As Sci-Fi films go, this is one of the better ones; and everyone will find things that they like in the movie. 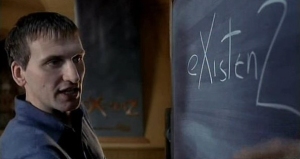 An all-star cast of actors even though they had small parts, Willem Dafoe and Ian Holm (the priest from “The Fifth Element”) make great cameos and add so much more to the movie. The bone gun that is used in the movie is freaking awesome, the number one reason is that it shoots human teeth! Its entire body is made out of various warped boned that are split up into several connecting pieces. 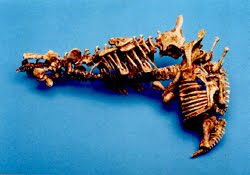 While playing the game it will jump you into the next area to advance the story which I found very nice, being a gamer I find it covenant especially because I hate to back track. When in eXistenZ while talking to the in-game characters that said character will go into a loop of the last sentence he or she said. You can only advanced what they say with certain dialog, I find that very unique in that it makes you really think about the situation and the situation you are in. With as much sexual tension as there is in this film it seems so over whelming and funny, especially because Jude Law is on the receiving end of it.

At the start of the movie the crowd they assemble are “gamers” but barely look nerdy at all, some you can spot but others look just like everyday people (this is more of a nitpicky thing). The “Pods” is another thing that bothers me, it just seems like a weird direction and concept to go in regards to future tech. They are made from amphibian DNA and grown, also people get attached to them, and it kind of sets me off. 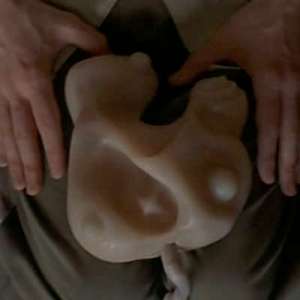